The New American: A Novel 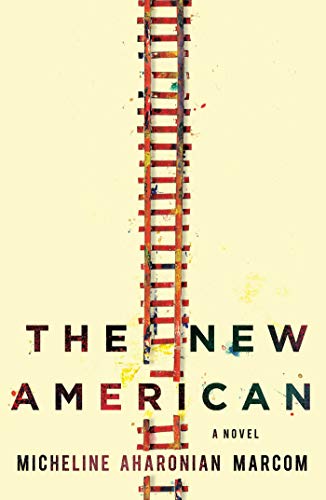 The story of a hero seeking to return home is one of our earliest forms of literature—the obstacles that Odysseus faced on his journey back to Ithaca are etched in our collective mind.

Author Micheline Aharonian Marcom has taken that classic form and brought it smack into the middle of one of the most harrowing crises of our time. In her gripping novel, The New American, Emilio has been deported from the United States and undertakes a journey as arduous and potentially fatal as Odysseus’s as he attempts to return home to California.

As a U.C. Berkeley student with a stable family and a beloved girlfriend, Emilio is shocked to find himself in an ICE detention center and on a plane bound for a country he knows nothing about. His Guatemalan immigrant parents had not told him he was undocumented, a child we now know as a Dreamer.

Determined to get back to California, Emilio sets out without telling anyone of his plan, feeling confident that he will soon make it back to his “real” life. He grasps this will be no ordinary trip when he runs into two American coeds on the noisy, dilapidated Blue Bird bus from Huehuetenango to Xela. Though he has a stash of U.S. dollars hidden in his shoe and a paperback copy of Great Expectations in his backpack, he immediately senses there is now a gulf between him and the young women. Emilio “hates that they can proceed from here to there with their correct identification papers tucked into hidden neck pouches, across international borders, thinking only of exotic things they might buy.”

After an encounter with a thieving pedicab driver in cahoots with crooked cops at the Mexican border, Emilio realizes he would be safer joining more experienced travelers. A young Honduran woman, Matilde, catches his eye as he waits to cross the Suchiate River into Mexico. He approaches her and her male companions, and they cautiously invite him to join their group.

Marcom’s vivid description reveals the serenity of the evening yet contains an ominous undertone. “The river green-blackens while their raftsman slowly pushes them across it. They can hear voices from dozens of other rafts moving on the water as they do. Hundreds of us are traversing it tonight, Emilio thinks. The air is still hot and humid, and he sweats as he has sweated all day. The dark river is calm and the stink of it rises on the crepuscule as the artificial lights begin to come on each side of the old waterway.”

After a tense moment mid-stream when the raftsman unexpectedly demands a higher fare, they are relieved to find safe haven at the House of Migrants in Hidalgo. Though the priest there admonishes them to turn back for their own safety, Emilio and his new friends, like all the others at the sanctuary house, continue north. Memories of the violence and hunger they have fled in Honduras, El Salvador, and Guatemala give them no choice.

It is not long before the padre’s warning comes true. A gang armed with machetes and pistols ambush the group the very next night. Emilio, Matilde, and the others are beaten and stripped of all their belongings, including their clothes and shoes. Miraculously, the naked and bruised migrants are taken in by a peasant family who provides them with old clothes, tortillas, and refried beans.

They carry on walking, blistered, sore, and sunburned, until they reach their goal—the train tracks in Bombilla where they will make a dash for the Bestia, the freight train that will carry them to the U.S. border. “Hundreds of migrants sit on the tracks. . . . A look of fear and insecurity resides inside their half-lidded eyes for the days that lie ahead, unknown and chaotic. “

Marcom deftly injects a note of normalcy into this ominous scene: vendors walk the tracks selling potato chips, bottles of water, coke, Fanta, cookies, and popsicles. Emilio imagines, “If I had my book right now I would read it.” In these perilous surroundings, he finds himself falling in love with Matilde.

But on the train their journey becomes even more deadly. The boxcars are packed and stifling. The travelers are hungry, sick, and dehydrated. Many have to ride on the tops of the freight cars, grasping sun-scalded metal bars for safety. A sharp turn can end up in a fatal fall. Unexpected stops can mean either generous gifts of sandwiches and warm sweaters from local villagers or a raid by armed gunmen demanding payment.

As they reach the Cumbres de Acultzingo, the train goes through a series of steep, pitch-black mountain tunnels. “The air becomes progressively colder.  They cling to the old blanket; their faces are grey and black soot runs from their noses. . . . No one says very much, afraid to use up more oxygen talking.”

The difficulties that Emilio and his companions face on their harrowing journey are relentless. Marcom’s book is reminiscent of Bernard Malamud’s Pulitzer-Prize winning novel, The Fixer, in which the falsely accused Yakov Bok keeps getting pushed further and further back into the bowels of the prison, with no end in sight. After the train, they still have to cross the arid desert. Readers may find themselves gasping for fresh air or a cold drink of water as Marcom’s harsh prose makes some scenes almost unbearable. At times, the brutal depictions make it hard to keep turning the page.

As the founder of the New American Story Project, Marcom has interviewed many young Central American migrants who have endured this treacherous journey. Her telling resonates with heartbreaking authenticity.  And despite the travails she is describing, Marcom’s writing is vibrant and often poetic.

She provides some insight into Emilio’s inner thoughts when she intersperses short dream sequences between chapters. Though some are nightmares, reflecting the dread Emilio has experienced in his waking hours, they are woven with visions of loved ones, serene beaches, and sweet family memories. Emilio the Dreamer is also a dreamer.

Like Homer, Marcom allows fate a generous role. She posts dates at the beginning of each chapter, so we learn that Emilio begins his very modern odyssey on May 10, 2012. A month later, President Obama announced DACA, the program granting protection from deportation to undocumented Dreamers.

Today’s headlines will not let us forget that thousands of other children are still riding the Bestia. Marcom’s compassionate novel illuminates their painful journey.

Elaine Elinson is the author of the award-winning Wherever There’s a Fight: How Runaway Slaves, Suffragists, Immigrants, Strikers and Poets Shaped Civil Liberties in California. The former editor of the ACLU News, her book reviews have appeared in the San Francisco Chronicle, Los Angeles Review of Books, AmerAsia Journal, and other publications. She was named a San Francisco Library Laureate in 2010.