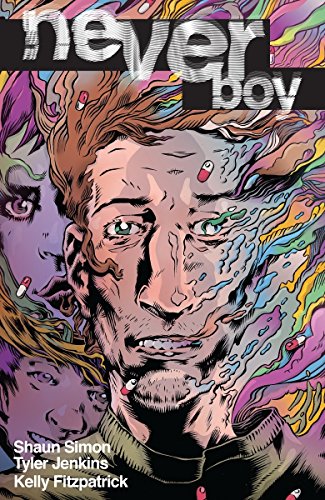 Neverboy is one of the strangest comics miniseries around, but it is compellingly whimsical, sad, and hopeful.

Neverboy is an imaginary friend who was left behind when his child died young; he decides he doesn’t want to go back to the land of imagination. He discovered years ago that drugging himself up has the opposite effect than it does on humans; for him, it allows him to be real, stay in the real world, and have a normal life. In the years he's been there, he's gotten married, had a child of his own, and managed to avoid the Diner (a semisentient way between the worlds) that wants to take him back. And then his drugs run out.

In an attempt to save his family and get away from the people trying to catch him, he runs into an artist so blocked that he's about to commit suicide—and something about that lets the artist see the imaginary beings coming after Neverboy. He gets Neverboy his drugs, but in exchange, he wants access to the imaginary world, even though that access will have terrible consequences for both worlds.

The art is strange and psychedelic, and the world they share is both incredibly normal and awfully strange—often simultaneously. It's a tale of a father trying to save his family (with a huge twist), and an artist trying to regain inspiration, and how the two help each other and actively clash, as well.

It's also a story of dealing with the consequences of actions even when they seem impossible. Regardless of such a dire setup, Neverboy is remarkably hopeful. Neverboy is not a very good adult, but he's also not much of a human at all (being a child's imaginary friend), and is trying to fit in; this saves him from being annoying and gives heart to what could have been a very bizarre story. Instead, it's a charming narrative with strange events and a general tone of longing and wanting to be better.

The six issues here combine to yield a complete story full of twists, neat ideas that get to play out interestingly, and some very cool images. When the barriers between worlds start breaking down, it gets even more interesting. The pacing is good—though quick as a miniseries must be, the characters are remarkably normal considering how bizarre their world is, and the heart keeps it from just being a drug-trip of a tale.

Neverboy is weird urban fantasy with a new and refreshing angle, yet somehow also manages to echo back to classically odd fantasy stories from the 60s.