Never Turn Back: A Novel 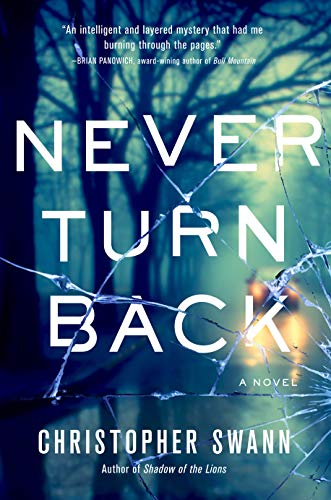 “A contemporary novel that tips its hat to multiple genres, Never Turn Back is intriguing, high-stakes fiction.”

A wonderfully unusual, utterly unpredictable twist of a puzzle with an edge, Never Turn Back warns you with its title that you’re in for something, and hints at the problem with a line on page two, when the narrator says, “The twin memories of my parents are like a pair of blades scissoring my heart.”

In three parts, author Christopher Swann lures us with breadcrumbs into the dark abyss of a home invasion, on the heinous night two siblings witness their parents’ murder, which sets the tenor of a story and spins the characters reeling in clashing orbits. Each character has their own version of the truth; each tries to grapple behind the other’s back. But there’s no reconciling the facts of an unsolved murder, and with seamless finesse, Swann wields the past and present like a mystery layered in multiple effects in search of the cause.

Narrator Ethan Faulkner has a name we take seriously. He rents a two-bedroom cottage in Chastain Park and drives a Corolla. He’s the twenty-something, battle-worn, English teacher we follow through modern day Atlanta with the sense that he’s just hanging on, a distracted, reactionary fellow we like for two reasons: He’s protective of his wayward, younger sister, and he loves his little dog.

Susannah Faulkner is Ethan’s problematic sister, who “operates on her own timetable, rarely calls or emails, and disappears for months at a time.” Maddingly capricious and poised to flare any minute, she is Ethan’s likable yet unbalanced project to manage, ever since the orphaned siblings find themselves wards of their shady, Irish flat-capped Uncle Gavin.

Uncle Gavin is the estranged brother of Ethan and Susannah’s mother. After their parents’ death, he appears for the first time in their lives and drives the adolescents in his black Lincoln Navigator to live in his remodeled Victorian in southeast Atlanta, where he owns a bar named Ronan’s we suspect is a front for double-dealings. When Ethen asks the taciturn Uncle Gavin if the police found his parents’ killers, “something gathered in Uncle Gavin’s face, hard and threatening. ‘If they don’t find them, he said, ‘I will.’”

In the way of an original wound damaging the spirit with unconscious repercussions that beget further chaos, Ethan attracts the romantic attention of Marisa Devereaux, whom he meets at an English teachers’ conference and engages with in a one-night stand—or so he thinks. Ethan arrives at work to the surprise of Marisa there for an interview. When she is hired, the pair pledge to work as professionals but their romance quickly ignites. What begins with the hope of cracking the carapace of Ethan’s wounded heart ends in a disturbing stalker dynamic, when Ethan ends the relationship. Bitter and unglued, Marisa’s revenge is creative, her antics are spine-tingling. Ethan worries with good reason: “Marisa’s rage unnerved me more than I’d like to admit, but the uncertainty of what she will do next is worse.”

Replete with coincidence, misguided intentions, and hidden agendas, the characters in Never Turn Back collide in a common vortex spinning on an uncanny axis. The clever story is written in au currant language savvy with present day pop-culture— they go to Starbucks, watch Tom Hanks movies, and debate the theories of global warming.

Never Turn Back packs all the tension of a psychological thriller put through the paces of an off-kilter mystery on its way to solution. Its intelligent dynamic is breathtaking, its smooth pacing is flawless. A contemporary novel that tips its hat to multiple genres, Never Turn Back is intriguing, high-stakes fiction.