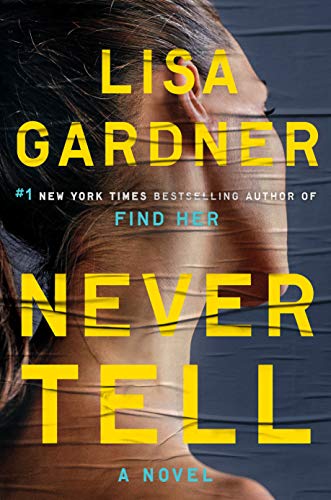 “The characters are well-drawn and compelling, the story dark and disturbing, but also redeeming. Gardner’s writing is beautiful, and the plot weaves together masterfully with detail and precision.”

Never Tell is a tale about women. Intelligent, complex, damaged survivors who must come together to tell the story. Alternating chapters give us the perspectives of three people, piecing together this dark and tragic narrative.

First there is Evie, accomplished math teacher, reluctant daughter, newly pregnant, uncertain of the state of her marriage:

“By the time I pull my car into the garage, my hands are shaking on the wheel. I tell myself I have no reason to feel so nervous. I tell myself I’ve done nothing wrong. I still sit there an extra beat, staring straight ahead, as if some magic answer to the mess that is my life will appear in the windshield. It doesn’t.”

Evie makes her way into her home, only to find her husband dead, brutally murdered in his office. Onto the scene comes Sergeant D.D. Warren, who knows Evie from an earlier case . . . when Evie confessed to killing her own father. D.D. is competent, smart, and dedicated to her job:

“Following an on-the-job injury two years ago, D.D. had been moved to a supervisory position in homicide. As her fellow detectives would attest—and Alex would agree—D.D. took a much more hands-on approached with her management style than was strictly necessary.”

The murder is not straightforward. From the first moment outside forces come into play, including information from D.D.’s confidential informant. Flora Dane, a survivor of kidnapping and torture, recognizes the murder victim. She can’t turn away from what this means to D.D.—or herself.

“The truth is, like a lot of survivors, I’ve been taught the hard way to ignore physical complaints. Basically, spend enough time starving, beaten, isolated, and you can teach yourself to ignore most anything. It’s true that what doesn’t kill you makes you stronger. But no one says that strength doesn’t come at a price.”

The three women tell the story through their own lives and perspectives, each somehow involved with the greater truth. How are the women’s stories connected? Which one of them is telling the truth? Which one is lying? Which one doesn’t know what to believe anymore? The answers will come, but to what end?

Never Tell is part police procedural, part inner discovery, part tutorial on what it means to be a survivor. The characters are well-drawn and compelling, the story dark and disturbing, but also redeeming. Gardner’s writing is beautiful, and the plot weaves together masterfully with detail and precision.

Lisa Gardner, the bestselling author of more than 20 novels, proves once again her storytelling skill. For anyone looking for a suspenseful, gripping read, Never Tell will not disappoint.