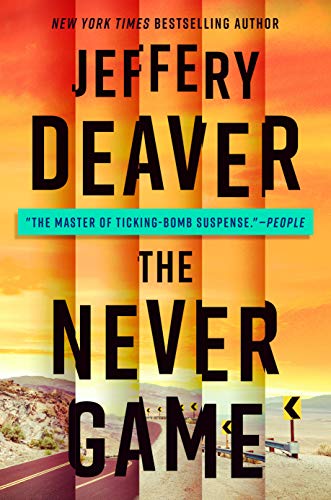 “Jeffrey Deaver has come up with another sharp, smart story with intelligent, emotionally mature characters.”

While on a job that takes him away from his home, he lives in a Winnebago and stays at RV parks. His everyday mode of transportation becomes a Yamaha dirt bike, except when he's calling on clients or interviewing witnesses. For that, he Ubers to a car rental place for something more suitable:

"He picked up a sedan, requesting any full size that was black or navy blue, his preferred shades. In his decade of seeking rewards he'd never once misrepresented himself as a police officer, but occasionally he let the impression stand. Driving a vehicle that might be taken for a detective's undercover car occasionally loosened tongues."

Books are supposed to start "in the middle of the action" and this one does, with Shaw rescuing a woman from a derelict fishing boat that is quickly filling up with water. But it doesn't have to start there. The action in the following chapter which takes place two days prior is just as compelling with Shaw pursuing a trespasser carrying a Molotov cocktail in his RV park.

As he nears the interloper, he smells the gasoline and plans his next step:

"Shaw was familiar with revolver, semiautomatic pistol, semiautomatic rifle, bolt action rifle, shotgun, bow and arrow and slingshot. And he had more than a passing interest in blades. He now withdrew from his pocket the weapon he used most frequently: his mobile, presently an iPhone. . . "

Clearly, Shaw is no fool. He picks his battles.

Another case in point. After he summons the police about the intruder and they ask for his ID, he readily presents it:

"There are conflicting theories about what to do when the law asks for ID and you're not a suspect. This was a question Shaw often confronted since he frequently found himself at crime scenes and places where investigations were under way. You generally didn't have to show anybody anything. In that case, you'd have to be prepared to endure the consequences of your lack of cooperation. Time is one of the world's most valuable commodities, and being pissy with cops guarantees you're going to lose big chunks of it."

Shaw takes up the case of Sophie Mulliner, a young woman who has gone missing. A $10,000 reward is offered by her father, but during a home visit, Shaw sees right away that the reward will be hard to come by. The house is shabby and in need of repair, bills and mail and ad flyers clutter the tables. Clothing lay in piles on broken furniture. Water stains show on the ceiling. Curtain rods sag from the wall.

During the visit, Shaw gets some disturbing information. Nineteen-year-old Sophie and her father had an argument before she went missing. Also, her beloved dog was left behind, something she would never deliberately do if she'd run off on her own.

Readers will be captivated by the methodical way Shaw goes about searching for Sophie, a systematic technique that could be used by anyone looking for a missing loved one on their own.

Applying what he's learned from his past cases, Shaw goes step by step in his mind trying to recreate what might have happened to Sophie, analyzing the percentages of missing person cases that are the result of murders, accidents, or just plain running away. The scenarios he comes up with are conveniently bullet pointed on the page.

A quirk in the editing will jolt some readers out of the story, though. For some reason, the editor has seen fit to use some peculiar contractions in the prose, contractions that work perfectly well when speaking, but are strange and annoying in prose.

Like this:  there'd for there had; her job'll for her job will; would've for would have; Dad'd for Dad had, etc. Is this something new in the editing world? It's awkward to say the least.

One more thing. There seems to be a trend nowadays of inserting controversial, politically driven "issues" into fiction even though those "issues" have little or nothing to do with the actual story.

That aside, Jeffrey Deaver has come up with another sharp, smart story with intelligent, emotionally mature characters. Plenty of twists and turns and subplots involving the techy world of internet gaming deftly handled by the author are sure to keep readers engrossed and turning pages to the end. Deaver is a joy to read.