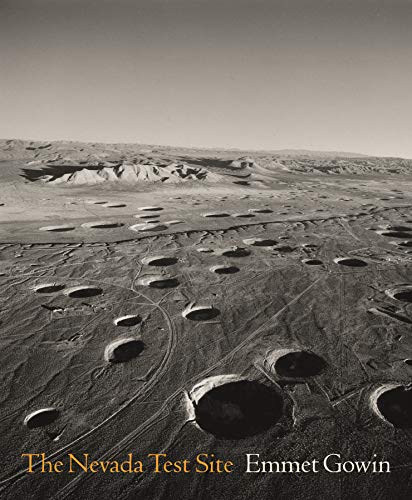 Given the length of time over which the United States government has conducted nuclear tests, most people should be familiar with the Nevada Test Site, especially given all of the publicity in recent years regarding the mysterious Area 51. What may not be so apparent to many, because of its desolate remoteness and secret and secure nature from prying eyes, is the result of those tests on the landscape and atmosphere.

It shouldn’t be surprising that the government would be reluctant to allow any personal or private ground-level access or low-level flyovers no matter what one’s intent or purpose, particularly given the potential danger from exposure to any radiation from the tests, atmospheric or escaped, and the changed nature of the landscape.

As it was, it took author and Professor of Photography Emmet Gowin about eight years before he was finally granted that access in 1996 and 1997 by the Department of Energy, by air only, in order to obtain the 67 plates that are included in this volume on the Nevada Test Site.

Although color photographs might have been preferable for some, the exclusive use of black and white in all of the images also manages to emphasize and bring out the remote starkness and desolation that explains why the government chose this part of the country to conduct its nuclear tests, as much for weaponry as for so-called peaceful purposes such as canal digging and harbor building. Black and white also highlights the changed nature of the landscape by those tests.

The changed landscape where underground tests occurred might be surprising, yet given that one might not expect ground subsidence from detonations which many times were thousands of feet underground, the ground is pockmarked with subsidence craters, some of which can be rather deep and wide. After over 900 tests, much of the site gives an appearance similar to that of the moon.

Between atmospheric tests and escaped radiation from some of those underground, there is some widespread contamination in certain areas, in particular, and, not surprisingly, an area called Plutonium Valley. Ground destruction is not terribly apparent from the former tests as they were air dropped or detonated using towers as was the first test in New Mexico in July, 1945.

With only minimal, low yield testing going on at the site, at least some parts of it have now been given over to radioactive waste burial facilities and some of these are included among the plates as well.

Each plate is captioned although, at first, the information provided may seem sparse to some. However, that information includes directional perspective, line of sight, topographical designation, its Test Site area designation, the year the photograph was taken, kiloton yield, dates of detonation and code names of the specific test, atmospheric or underground and GPS coordinates for the location.

Complementing the plates is a nine-page chapter by the author which explains how he conceived this project and the necessary work and efforts undertaken to persuade the Department of Energy to allow him access although not without some restrictions, such as a minimum altitude for his helicopter platform and not photographing or even taking notice of Area 51.

A short foreword was written by another prominent American photographer, Robert Adams, whose photographic work has appeared in more than 30 books, according to the jacket.

Also helpful in the back of the book is a map of the Test Site, obtained from a gallery section within Google Earth. It delineates the many areas within the site for reader reference to the information provided in the plate captions. Between the plates themselves and the map, the use of a magnifying glass is recommended in order to bring out some details, considering that the photographs were taken from the air.

This is a rather heavy, sturdy, well-crafted, high-quality book with the same level of photographic quality inside. Indeed, as a pictorial work, it should certainly be considered a coffee table book. As such, it justifies its price for a 160-page publication.

For those who like photographic studies and panoramic landscapes or who may be interested in the “work” done on society’s behalf by the government, this is a publication that can fill the bill for all.