NeuroScience Fiction: From "2001: A Space Odyssey" to "Inception," How Neuroscience Is Transforming Sci-Fi into Reality—While Challenging Our Beliefs About the Mind, Machines, and What Makes Us Human 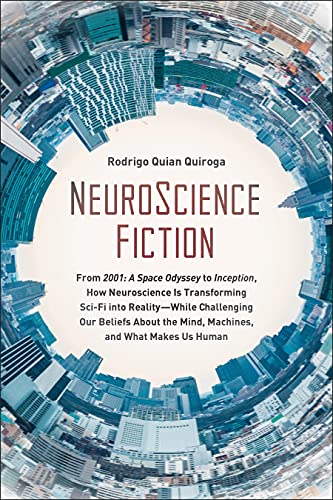 “Reality isn’t what it appears to be. Our perception of reality is a construction of the brain, and science is achieving what decades ago seemed impossible.”

Developments in neuroscience have turned yesterday’s science fiction into fact. Rodrigo Quiroga, director of the Centre for Systems Neuroscience at the University of Leicester, illustrates how the premises of ten classic movies that seemed outlandish at the time are being rendered possible by discoveries happening right now.

We can, for example, ascertain what a person is thinking or seeing based on measurements of his brain activity. This is just one example Quiroga gives of “How science is achieving what decades ago seemed impossible.”

The predictive algorithms depicted in Minority Report are currently in use in a number of U.S. cities, identifying individuals who “probably” might be involved in future crimes. But these algorithms are proprietary, meaning that their workings are secret and that accused individuals have no due process.

Quiroga’s other cinematic examples call on Blade Runner, The Matrix, Planet of the Apes, 2001, Inception, Total Recall, Robocop, Until the End of the World, and Vanilla Sky. Most of these classics will be familiar to readers.

In addition to technical points the author explores philosophical issues such as free will, the nature of emotion and whether androids can have them, whether reality is just an illusion (the brain-in-a-jar scenario), and what exactly is it that makes us distinct from other species.

What is it about the red light of HAL in 2001: A Space Odyssey that persuades us that “he” is sentient? While challenging our wits Quiroga recaps the histories of philosophy, perception, machine learning, and AI. The book would benefit from a tighter focus, as these sidetracks veer off subject into astronomy, Gestalt psychology, and even stage magic. The chapters are also uneven in length and depth of treatment.

Nonetheless he poses questions to the reader that may look simple but are deceptively deep. “Compared to the storage capacity of computers, humans remember very little. But why?” The answer is that the brain does not seek to recreate reality, but “instead focuses its resources on trying to understand it.” Information isn’t simply stored in the brain, “it is constructed.”

The truth is that we see very little and assume the rest—which is why films like Inception can tantalize us by asking how we know we aren’t dreaming what we think of as everyday life? The question leads into a discussion of narcolepsy and lucid dreams, meaning the ability to voluntarily direct one’s nighttime dreams.

Consider the technique of optogenetics in which genes for light-sensitive proteins are implanted into specific types of brain cells in order to control them using light impulses. This contemporary work bears on the possible use of memory implants as imagined in Total Recall. The idea isn’t that far-fetched because “the brain naturally generates a construction using only a few associations.”

The author singles out The Matrix for its “departure from the grand themes, future civilizations, and epic interstellar journeys that have characterized sci-fi.” In turning a fresh eye on marginalized individuals who rebel against societal norms, the film speaks to what it means to be human. An early scene emphasizes a book by French philosopher Jean Baudrillard, Simulacra and Simulation, which sets up the movie’s theme of the bewildering difference between reality and illusion.

Quiroga further relates The Matrix plot, entertainingly so, to the writings of Jorge Louis Borges. He ties most of his other film examples to literary references, too. Some even reach back to antiquity: in Robocop, for example, pieces of the hero’s broken body are replaced bit by bit with cybernetic reproductions, artfully linking the film back to Plutarch’s puzzle of whether the ship of Theseus, having plank after plank replaced over time, would in the end still be Theseus’ ship.

In these Covid times when bored people are looking to occupy themselves, this book offers plenty of food for thought.