Net Neutrality and the Battle for the Open Internet 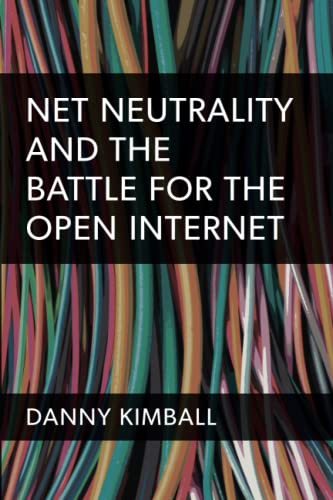 “A handbook for activists on the front lines as well as a reference for academics and journalists, Kimball’s book shows how new words and meanings invited “everyday people” into the policy-making process.”

Debates on how we rule the internet hinge on words—often words with contested meanings. What do we really mean by data privacy, free speech, and competition?

Often it’s the words with the greatest firepower that send out the fewest sparks. Such is the case with net neutrality, a standard meant to regulate the internet like a utility. And also with its polar opposite, an internet unregulated, which comedian John Oliver famously dubbed, “evil wrapped in boring.”

In Net Neutrality and the Struggle for the Open Internet, Danny Kimball explores the cultural contours of these specters. A smoke screen of jargon in U.S. policy-making helped telecom giants in 2002 seize control of an important slice of the internet—the “last mile” that reaches our devices. The next year, opponents coined the soporific phrase, “net neutrality”—hardly an antidote to policy jargon, but whose amorphous quality, Kimball observes, ironically helped the cause.

Telecoms favor a corporatized net neutrality, saying they can self-regulate, be neutral and fair. But corporations aren’t designed for the public good, Kimball notes, arguing that net neutrality means one thing: an internet governed as a public utility—a “common carrier.”

Whether you’re an individual posting a YouTube video on police brutality, a union organizer running a website, a powerful streamer like Netflix, a smaller platform like Curiosity Stream, or a library-supported service like Kanopy, you get equal treatment. And users don’t face deliberate slowdowns (throttling).

The internet was initially neutral like that, accessed through a common carrier, a phone line via a dial-up modem. But when the last mile moved to broadband, the Bush Federal Communications Commission (FCC) ruled it an “information service” outside regulatory purview, a “private” concern. Telecom companies could now charge content providers for fast data delivery, leaving others on a dirt road. Opponents called this a system of discrimination.

In 2003, legal scholar Tim Wu coined “net neutrality,” stating a non-discriminatory internet is vital to protecting online innovation and competition. He later strengthened that vision to define a neutral internet as a crucial “public good” supporting “equality in the public sphere.” (Wu is now Special Assistant to President Biden for Technology and Competition Policy.)

Telecoms and their lawyers and lobbyists decried net neutrality, calling it a government takeover. CEO of AT&T Ed Whitacre encapsulated their claim on the last mile: “Now what they would like to do is use my pipes for free, but I ain’t going to let them. Why should they be allowed to use my pipes?”

Compared to Whitacre’s “pipes,” the phrase “net neutrality” was a wet noodle, but Kimball shows that it had a “discursive neutrality”—it was a tabula rasa that brought people together by letting them attach to it their diverse values.

“Net neutrality is boring,” he writes. And “counterintuitively, that helped people get behind it.”

This book offers lessons for all social justice movements, demonstrating how media activists transformed an opaque policy debate into a kitchen-table topic. Kimball is informed by cultural theorists such as Raymond Williams, a Welshman who observed that society’s “key words” contain struggles over meaning. With that in mind, Kimball examines both sides of the issue from 2002 to 2017 in the U.S., showing that “arcane specialist definitions” in policy-making met a formidable foe in the activists’ cultural works.

Those works included words, images, videos, cartoons—and John Oliver’s viral rant, which was viewed on YouTube by millions and inspired people to deluge the FCC with comments, crashing the website.

A handbook for activists on the front lines as well as a reference for academics and journalists, Kimball’s book shows how new words and meanings invited “everyday people” into the policy-making process. They steered the discussion toward the bigger questions: power and democracy.

For all its attention on transcending insider language, the book is surprisingly heavy on academic language. Even scholars might stumble over “the wonkish populist discursive tactics of advocates and publics were able to overcome the neoliberal power dynamics of privatized regulation to redefine broadband within a regulatory framework consistent with net neutrality.”

Other sentences sing: “When Google was seen embracing Verizon, the public displays of corporate affection caught many off guard.” But the seesaw of styles can be disorienting.

As such, net neutrality has become another partisan war.

Kimball opens the book with the idea that democracy depends on net neutrality. But he ends by saying it’s also the other way around: “Net neutrality will survive, thrive, or perish hand in hand with democracy itself.”

Alice Horrigan is a journalist whose feature articles have appeared in the Fairfield County Advocate, E-The Environment magazine, Pasadena Weekly, and The New York Times. She covers a wide range of news and public affairs, including environmental issues, data privacy, and the intersection of technology and culture.