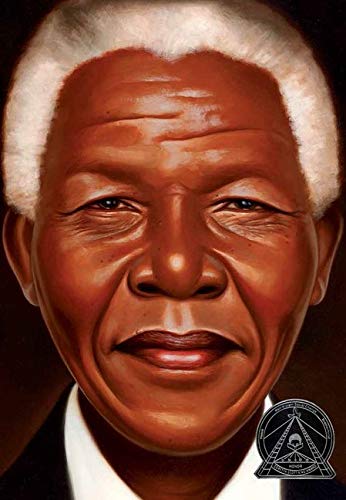 “Kadir Nelson has created a beautiful, heartfelt tribute to an icon of social justice.”

The larger-than-life cover image sets the respectful tone for this tribute. Readers soon catch a glimpse of him when he was “the smartest Madiba child of thirteen,” the only one chosen for school. His new teacher gave him the name Nelson rather than use his given name, Rolihlahla, which, according to the author’s notes, means “troublemaker” in Xhosa.

Next we see a moving image of mother and son as they say goodbye. To continue his education, Nelson must move in with a chief who lives miles away. In this way, the boy learns from the community of elders who recalled how bountiful and peaceful their country was before the European settlers conquered it.

Nelson Mandela continued his education in Johannesburg, where he became a lawyer who “defended those who could not defend themselves.” Injustice infested the city and beyond.

The author/illustrator’s vibrant double-paged spread of a bright, shining beach provides a brilliant space for showing young readers the warped reality of apartheid. The scene is filled with Caucasians blithely sunbathing near the stark black and white sign designating the beach as “white area by order secretary.”

While the gritty details of oppression are omitted, young readers will come to appreciate the price Mandela paid for speaking out against apartheid. By doing so, he broke the law and endured threats, jail, and worse.

Mandela’s determination transcended these risks, however. The author/illustrator switches to a panoramic view of a plane soaring over pyramids to show how Mandela traveled to experience other cultures and ideas relating to freedom and justice.

The contrast between that scene and the next, a double spread highlighting an undaunted Mandela behind bars, is eloquent and haunting, especially as what follows is a description of his new life in a cramped cell on a small island off the coast of Africa: “Every day/ the world passed him by./ Cold mealies, thin blankets, hard labor./ Nelson hammered rocks into dust, and/ read, studied, and educated fellow prisoners./ Days turned into weeks, months, and years.”

Yet Mandela promised the people he would return. During his 27 ½ years in prison, South Africa eventually abandoned its policy of apartheid, as depicted in Kadir Nelson’s wide-angle image of an integrated beach open to people of all shades and hues.

Upon his release, the triumphant, but snowy-haired Mandela was elected to lead South Africa. Concluding notes provide additional details of Mandela’s dramatic life.

Kadir Nelson has created a beautiful, heartfelt tribute to an icon of social justice.