The Neighbor's Secret: A Novel 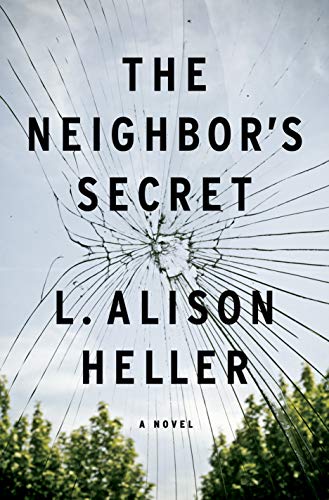 "I saw the two of them leave the party. I could think of no appropriate reason for them to sneak off together, but I told myself it was none of my business."

"Oh what a tangled web we weave when first we practice to deceive."
—Walter Scott.

How well do you know your neighbors? Do you ever wonder about the secrets that lurk behind closed doors? Alison Heller gives the reader a taste of nosy neighbors, flawed characters, disturbed teenagers, vandalism, and murder. A thriller a la Big Little Lies. The various themes dealt with include lying, violence, mental illness, alcoholism, and abusive relationships.

The setting is a wealthy community of Cottonwood Estates. It's a quiet neighborhood with almost no crime. The main characters are seven families, with the couples outwardly seeming happily married and satisfied with their lives. Each harbors a secret about their inner lives. Each believes that their children are excelling in high school and are making plans for university. Sierra, Deb Gallagher's daughter, and Laurel are in the same class and are friends. Janine believes that her daughter, Katie, is getting the best marks in her class. When she fails an exam, her husband speaks to a colleague on the Board of Directors of the school, and he changes her grade. Each family is competitive and each moved to Cottonwood Estates to escape their problems.

Lena Meeker, widowed, is a mysterious person who rarely leaves her home. Her secret involves the truth about her husband's death. Rachel, her only daughter, is the only one who also knows the truth and is estranged from her mother. "Lena forced herself to flatten the memory like it was an empty cardboard box. . . . Rachel had it wrong. Lena wasn't a manipulative super-villain. She was, at heart, a people-pleaser . . . Life—people—did succumb to patterns and rhythms. The neighborhood was an assembly line. Little fungible dolls on a conveyer belt, moving in, moving out."

Jen is the main protagonist. Her son, Abe, has been classified as a person with a conduct disorder by Dr. Scofield, a psychologist. "Abe fit the criteria for conduct disorder, a precursor to sociopathy." She has to carry around this horrible secret when she socializes with her neighbors. He tortured a hamster and felt no remorse. He feels no emotion. He was kicked out of other schools. Jen is in denial. She refuses to believe that Abe is a sociopath. He just has a conduct disorder.

Not only that but her husband is always traveling, and she has to deal with this situation alone. She also feels guilty that she spends too much time on her research on animal behavior and can't be a full-time mother. She pictures other parents taking Abe to soccer games. "Jen's career ambitions were not the cause of Abe's issues—linking the two was misogynist draconian nonsense—but part of Jen had always wondered deep down, oh, so very deep down because she knew it was crazy, plenty of parents worked but—"

Jen and Paul thought that they would move into a nice neighborhood and send Abe to a prestigious high school. However, when he stabs a classmate with a knife and feels no remorse, the principal expels him.

Jen finds out about another school, a religious one, called The Kingdom School, and decides to enroll Abe. She doesn't tell the principal, Nan Smalls, about Abe's behavior and wonders why she accepts him without asking. Abe's sole interest is video gaming, and his goal is to create his own original video game. Abe's reluctance to enter the school subsides when he meets Colin, an assistant teacher, who is playing his guitar. He offers to help Abe with his goal of creating his own video game. Colin eventually becomes a frequent guest at Jen and Paul's home where he eats meals and hangs out with Abe in his bedroom. Abe's behavior improves as he begins to trust Colin and considers him a friend. Jen and Paul wonder about Colin's background and if he's gay.

When everyone in the neighborhood thinks that all is well, Janine spreads the word that some of their mailboxes were vandalized. When other acts of vandalism begin to occur, Jen begins to suspect Abe. When confronted, Abe vehemently denies it. Jen still doubts him but refuses to believe that he would lie to her. She actually has a good relationship with her son but always has the word "sociopath" at the back of her mind. She's afraid to say it out loud. How can she be sure that Abe's psychologist is correct? "But I'm wondering," Jen said, "if you might have been right about him?" Jen is constantly struggling with herself. "Could she even consider this about her son, let alone say it?"

Janine organizes a book club for all the women, who are expected to attend once a month. It's the thread that weaves this book together. "We're baaaaaak! Xoxo, Janine. PS. Themed snacks only, please!" The books they choose to analyze are similar to the events going on in their lives. For example, The Monster Next Door. "Horrible luck or has the monster next door left a trail of bodies?"  Another book on the list: The Girl in the Woods. The discussion of the plot leads the women to confess embarrassing episodes in their lives. For example, "Every time she gets tipsy and we read a steamy book, Janine confesses that she made out with a woman in college and it was hot . . ." The book club is the place where the ladies reveal gossip, betrayal, and deadly secrets. Some know the truth but keep silent. There is some welcome humor to a serious plot. Also, the author cleverly uses this book club as a foreshadowing of future events.

Meanwhile, the plot thickens when Laurel and Sierra get drunk at the annual food fest run by their school. Laurel's mother, Annie, is shocked, embarrassed, and ashamed. Laurel is one of the top students, studies hard, and gives her no trouble at home. After this episode, Laurel begins to fail her exams and doesn't bother to hand in her assignments. We begin to see the unraveling of those parents whose children are supposedly at the top of their class. Annie punishes Laurel but she still refuses to tell her mother what's going on. Annie can't keep this secret from the book club because they all saw Laurel's behavior at the Food Fest.

One day, Jen is cooking dinner when she suddenly hears banging, crashing, and screaming upstairs. She dashes to Abe's room where Colin is trying to calm down a violent Abe. His room is clattered with furniture which he smashed and threw against the wall. Colin explains that Abe became incensed when someone on his video game channel unfriended him. Jen is worried that the cat is out of the bag. Colin will now know that Abe is a sociopath. However, Colin treats it as a temper tantrum and takes Abe outside to play basketball.

They meet Laurel who begins to play with them. Eventually she starts to hang out at Abe's house even though Annie thinks that it's a toxic relationship. Abe designs a morbid video game in which he kills Laurel. Colin shows the video to Annie, who becomes concerned about their relationship. However, when Laurel comes over to Jen's for ice cream and video games after the basketball game, "she seemed polite and sweet and not at all like someone who would destroy property."

One morning, Jen is ready to drive Abe to school and finds her windows and side mirrors smashed. She confronts Abe but he denies that he's the culprit. Jen finds out that Laurel Perley is out jogging all night. She asks Abe if she runs alone, and Abe answers that he doesn't know.  "She thought of Laurel's messy performance at Fall Fest. She has a rebellious streak. How late is she out running every night? Not too much of a stretch from that to vandalism. Hey, wake up, Scofield, she thought, it looks like we have another suspect."

The author, with flashbacks, reveals the past relationships between Nan Smalls, principal of the Kingdom School, Lena, and Annie. Each one had her own special relationship with the same people. Each one ended badly. Lena's husband was killed in a car crash. It appears he may have run his car over Bryce Neary, Gary Neary's teenage son in a hit-and-run accident. The secrets around this incident are revealed later. There are other secrets that that leave the reader wondering what will happen next: "I saw the two of them leave the party. I could think of no appropriate reason for them to sneak off together, but I told myself it was none of my business."

It seems that both Annie and Lena knew Bryce and his father. Lena finally reveals that she had a romantic relationship with Bryce's father, Gary Neary, when Bryce was three years old.  Annie had an affair with Bryce and with Lena's husband, Tim. Annie eventually marries Mike. When Lena visits Annie and sees a photo of Bryce on Annie's desk, she turns white and leaves. Annie goes to Lena's house the next day, but she doesn't come to the door. "On Lena's steps, Annie was subsumed by a wave of despondency so strong that she could hardly breathe for the thick of it, washed up her nose and down her throat. It would pass. No matter how hard you fought for one, there was no such thing as a completely fresh start."

Throughout the book, there are hints about the truth of what happened to Lena's husband. Lena's guilt gives her nightmares. She dreams that she's at Bryce Neary's funeral, standing next to her daughter Rachel. When Bryce's college friend calls out: "Do not stand on my grave and weep," Rachel's wails drowns out his young voice. "This is wrong," she cried. It's wrong, what you did is so wrong." Lena knows that Rachel is judging her and not Tim, her husband. "You've gotten away with it . . . You're safe now." Was Lena having sex with Gary Neary the night that Bryce was killed? Lena now has to live with guilt and shame and Rachel's hatred.

The twists, turns, and surprises throughout this book will keep readers on their toes until the shocking ending. The characters will remain on their minds for weeks to come. Who is Colin? Why such a personal interest in Abe? Why does Nan Smalls not ask why Abe was thrown out of every other school? Is it right of Jen not to tell Nan about his conduct disorder? What did Laurel and Abe have in common? What really happened in the woods at the party? Who really killed Bryce Neary and why? What truth was Rachel hiding?

Although the suspense keeps the reader engrossed, it's difficult to keep track of the names of the many characters—who is married to whom, which parents the children belong to, and the flashbacks that introduce many other characters. It's up to the reader to figure out the various plots and subplots and the multiple array of characters.

A challenging book for readers of suspense and mystery.