The Natural Mother of the Child: A Memoir of Nonbinary Parenthood 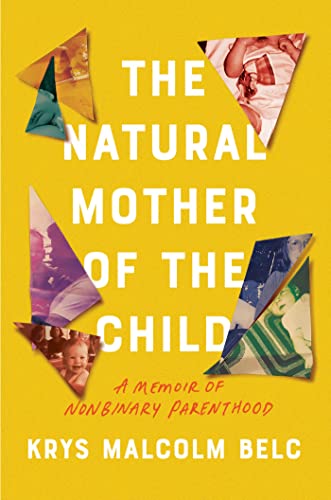 The author, Krys Malcolm Belc, is a nonbinary, transmasculine parent who shares his journey from giving birth to his son, to his decision two years later to take testosterone therapy, and to becoming “Samson’s dad.”

Belc became pregnant when his wife Anna’s son was only a few months old; the nurse giving him a pre-natal exam says that if he doesn’t want to breastfeed then his wife could feed both children. In the event he chose to breastfeed. They now have a third son who is the first of their children to have known Belc only in his role and appearance as “father.”

The dramatic story toward self-realization is told in a series of very short and matter-of-fact chapters illustrated by ultrasound images of the intrauterine Samson; birth certificates and other legal documentation relating to Belc’s name change from Krystyn to Krys, their two marriages (the second being same-sex); and the second-parent, or kinship adoption of Samson by Anna.

In addition to providing this review of the bureaucratic processes involved, Belc considers the complex reactions of family and the wider society to the changes he has undergone. Some of these societal reactions impact particularly his son Samson who has known him both as a mother and as a father, and wants to know whether there are other families like his.

This is a gripping testament to marital and parental love to be enjoyed by any reader, and powerfully informative for any person considering a similar path to the one so courageously chosen by Belc.