In the Name of the Children: An FBI Agent's Relentless Pursuit of the Nation's Worst Predators 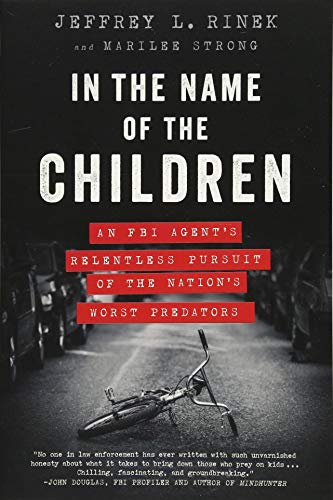 “For those willing to stomach the brutality, In the Name of the Children is a revelation and a testimony to the fact that some individuals cannot be cured.”

Few things can rouse people to anger quite like crimes against children. Former FBI Special Agent Jeffrey Rinek spent his entire career investigating crimes against children. For Rinek, the faces and bodies of those children who were tortured, mutilated, raped, and murdered by the world’s worst predators still haunt him every night. As such, In the Name of the Children, which is a memoir about Rinek’s toughest cases, should only be read by those who can withstand true

In the Name of the Children begins with a detailed account of Rinek’s upbringing in the city of Philadelphia. Contrary to the popular image of the FBI agent (a WASP-ish or Catholic European American with an Ivy league education), Rinek was the son of a Jewish mortician and grew up with a clubfoot. Rinek also had to work his way up the FBI’s ladder the hard way, putting in years of tedium as a clerk in Washington, D.C. and a financial crimes specialist in New York City. In that time, one of Rinek’s young sons almost died due to malfunctioning kidneys, thus forcing the family to relocate to the quieter, more family friendly climes of Sacramento, California.

In Northern California, Rinek would make his name as a tireless hound of justice. The first case detailed in this book involved Frankie Proctor, a mixed-race child who was snatched from his home by two masked men. Rinek and other investigators ultimately found out that this case was actually a terrible instance of good motivations manipulated by someone who was herself suffering inhumane abuse. Rinek often mentions that this cycle of violence (young victims grow up to become adult predators) is frequently encountered in the world of child sex crimes.

Some of the more disturbing cases in In the Name of the Children include the torture and murder of eight-year-old Michael Lyons, a young man abducted during the daylight hours by convicted pedophile Robert “Rocky” Rhoades; the abuse and murder of six-year-old Alexia Reale, who was forced to drink bleach by her mother and stepfather because they were convinced that she was possessed by a demonic vampire; and the murder Alexander “Salaam” Olive, the son of Rosemary Judith Olive who came into this world after his mother was raped by the charlatan Ulysses Roberson.

A majority of this book is dedicated to Rinek’s hunt for and ultimate capture of serial killer Cary Stayner. Stayner abducted and murdered four people in the vicinity of Yosemite Park. Tragically, as a child, Stayner himself was sexually abused and saw his younger brother abducted and detained by a child molester for several years.