The Naked Shoe: The Artistry of Mabel Julianelli 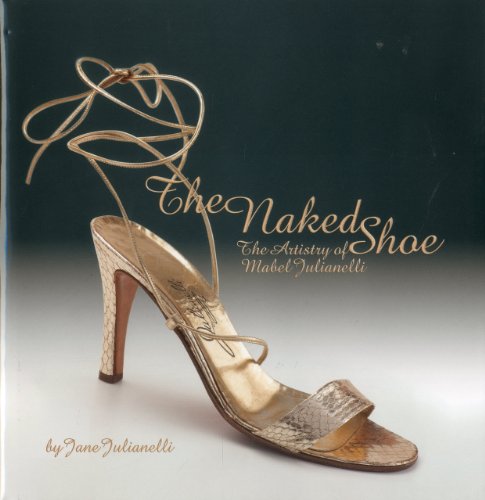 While the subject matter might seem bland—the history of some shoe designer?—rest assured that The Naked Shoe is much more than a textbook recounting of the many accomplishments of this designing couple. Ms. Julianelli, the daughter of Mabel and Charles, has instead produced a genuine love story starring her parents and their chosen profession and the love and devotion that each accorded to each other and to all those who surrounded them.

The premise of a very talented, but less than gorgeous, woman who meets and falls in love with a movie-star handsome man, marries, and together builds a spectacularly successful business is what 40s movies are made of . . . think: Mildred Pierce but more focused on the couple rather than just Mildred.

Mabel and Charles had a dream that forged not only their undying love for each other, but also their devotion to their talents, which lead to a nearly unmatched—and before The Naked Shoe, untold—tale of success born of acute fashion acumen and innate talent.

Starting from humble beginnings, these two lovers defied the convention of their times and married with no regard to their “faiths.” Very much in love, they began a journey that took them from humble homes and launched them into the stardom of New York society in the 40s and 50s.

This was just the start of the trajectory that catapulted the Julianellis onto the international stage, making them perhaps the first couple to become fashion superstars together. Beyond all odds, Mabel Winkle Julianelli influenced footwear and fashion for decades to follow. She and Charles flouted conventional wisdom and did what they knew would be best and most appreciated as opposed to choosing an easier, less outrageous path.

The “naked shoe” was a style conceived of with vision and talent that can only be attributed to the couple collectively as one had the dream, and the other had the wherewithal to make it happen. Together they revolutionized the shoe business; and despite Mabel’s incredible shyness, she became a force to be reckoned with in the fashion community. The Julianellis did have the added help of being supported by the echelon of retailers, editors, fellow designers, and one great public relations woman who helped catapult them to stratospheric heights of success and accomplishment that to this day remain unmatched.

Do not miss the opportunity to revel in this story that reveals part of what made the fashion business a powerhouse in New York City. This love story—on so many levels—would be a great and thoughtful gift to any one involved in the fashion business or even just someone who believes in happy endings.

There is so much more to The Naked Shoe than is highlighted here, including the added benefit of more than ample photos and remembrances by those who knew the Julianellis.

Rarely can one be touched and educated by the same book . . . thank you, Ms. Jane Julianelli, for sharing your parents and their incredible story with us.