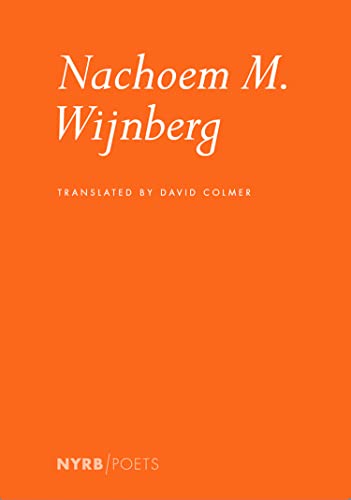 To start, let us thank Nachoem Wijnberg for doing something rare in poetry. He admits openly what all poets know of themselves: that they are talentless, and their success unearned. Many of them are wrong. Mr. Wijnberg can take pride, as so many men like to do, in being right.

It is oddly refreshing to see an author admit this; it is, perhaps, an unconsidered reward of the famous Dutch propensity toward speaking directly. A middle-aged business professor in Amsterdam, he tilts into it in the poems and in their titles alike: large fonts let you know one poem is titled My father says that it is sensible to get into something in which mediocrity is no disaster, like the field in which I am a professor.

Still, in this anthology (offered in translation by the New York Review of Books) a 30-year span of selected poems manages to do what poetry must always do: raise an emotion. In this case, that emotion is shock. Page after page, shock: that an editor went through 30 years of poems that managed to put their blot onto otherwise unblemished paper and that, somehow, these were the best of them.

Nevertheless, there is an issue to be discussed: If poetry is supposed to be, first and foremost, an expression of the experience of the poet, why should it be unacceptable for a boring life to produce boring poetry? In this book there’s a lot on offer—30 years produces a lot of work—but the biggest takeaway is that it offers nothing but boredom. Boredom on tap, boredom in an unstoppable faucet. It’s got everything for you if you’re into that sort of thing: jokes that aren’t funny, history lessons that are ahistorical, and poems that aren’t poetic.

Professor Wijnberg teaches a boring topic and writes boring poems about boring life. That’s fine; after all, life is boring. And it feels fitting that Wijnberg makes his life in Amsterdam which, in spite of being full of prostitutes and drugs and urinating tourists, manages to be the most boring city in Europe.

Amsterdam is a city full of large meals. Imagine sitting in a cafe there at 2 a.m., sober as a judge, and watching the two most stoned people you’ve ever seen eat three racks of ribs and eight pancakes while giggling. In the end, it did for them what it needed to: They ended up full and forgetting all of it. Mundanity can make a meal, and on exactly such mundanity large meals are easily made but, still, are elevated to anecdote. Made over 20 years and clocking it at hundreds of pages, this is such a meal.

There is, however, something to be praised here: a true universality that spreads and folds its wings around the sum of the work: elements and influences drawn from thousands of years of other poets, whose work Wijnberg has seen and, if not absorbed, at least reflected as a mirror.  There is a true catholic voice in the poems whose sounds come from instruments of every nation and mix to make music: we—the great we, the biggest we possible—are Chinese and we are Jewish and we are English and we are Dutch and we live on Earth and one day we could live on the moon or beyond. All the world is one. But Wijnberg reminds us, even if unintentionally, that nothing magical ever happens because nothing magical has ever happened.

The poems are not good. But they try to be. Sincerely: they try to be, and that is to be praised.  It is not so much poetry as an encyclopedia of extractions that, taken independently, feint toward art:

“I rub my face raw on beauty. I do not waste my time.”

“Soldiers die for him / differently than they would die for the state.”

“the foreigner says: you were foreigners yourselves once too, / and they say: no, not us, we’ve always been here”

I am the egg man. I am the walrus. Koo-koo-ka-joo.

So far from context, a great deal of it ends up sounding like another Amsterdam icon: the Dutch crime boss depicted in Ocean’s Twelve who speaks in intended abstractions that are, of course, just tortured codes.

Again, the poet tries.  A more generous and dishonest appraiser would remind you, here, that Icarus also flew. But instead, we’ll let the author himself review the work, with the very title of a poem he’s included in it as a centerpiece:

Question: So Are Poets Not Allowed to Be Bad at Their Trade?

Answer: If They’re Poets, They Can Be as Bad as They Like.