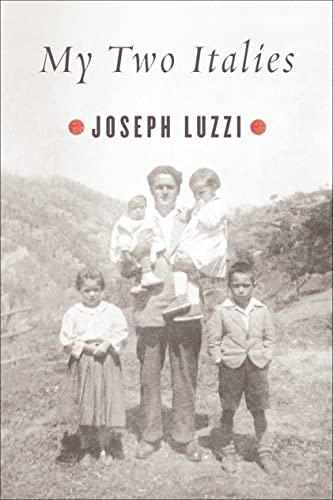 “The sense of being pulled in two directions begets tension, alienation, and flecks of enlightenment . . .”

Juxtaposing vivid personal details with an expansive perspective, Joseph Luzzi probes his background, indelibly shaped by his parents’ own upbringing in a hardscrabble Calabrian village.

“From the animals our family raised to the foods we cured, the aromas and tastes of my parents’ abandoned region continued to permeate their lives,” Luzzi writes. His amusing opening scene of the Easter Sunday when his pet bunny becomes the entrée for the family’s lunch demonstrates the contrast between Joseph’s rearing in a “squat three-bedroom” home in Westerly, Rhode Island, and that of his peers. The boy reacts not only with tears but with trepidation: “What if they discover this?” Yet tellingly, after Joseph finishes sobbing, he joins his relatives at the table to eat.

The sense of being pulled in two directions begets tension, alienation, and flecks of enlightenment for Luzzi, a professor of Italian at Bard College and author of nonfiction books on Italian culture, film, and the Divine Comedy. Like Janus, the two-faced Roman god of the past and the future, Lucca explores multiple perspectives in a bracing attempt to scrutinize layers of reality.

Instead of continuing to reproach his parents, for instance, the author eventually comes to appreciate their culinary preferences. As he remembers how Pasquale and Yolanda Luzzi nurtured those animals before killing them for their own nourishment, he realizes they were simply performing “honest work,” the kind now seen as integral to the Slow Food Movement, in which the pleasures of eating fresh food go hand-in-hand with responsibility.

Food and culture are inseparable, Luzzi acknowledges. Yet, many other facets of his cultural heritage present a murkier terrain. As the author attempts to see his family in the context of Italy and in particular, the poor southwestern region of Calabria, he tangles with distressing ironies.

In fact, Luzzi’s plain title signifies a string of dichotomies characteristic of his ancestral homeland. The author alludes to the poet Shelley’s view that there are two Italies, “one sublime and the other odious.”

The poet, like this author and many others, found a vast contrast between the North, long considered “more European” and the South, the poorer, more corrupt Mezzogiorno associated with Africa. Mr. Luzzi reveals that as an adult, he first came to love Italy while spending his junior year abroad in the vaunted Tuscan city of Florence. “That first visit to Florence had triggered something that inspired me to become a professor of Italian. The art, the architecture, the food, the history—I would make a career of it.”

Despite the rewards of that decision, losses lurked. The author, for instance, long joined others in looking askance at the much-abused South of his ancestors. “Florence, I believed, would enable me to upgrade from my parents’ Calabria to a calzone-free Italian lineage.” Inevitably, such a goal leads to Mr. Luzzi feeling like a stranger in a strange land.

The author employs his literary heroes to lead him in a deeper exploration of the Old Country. Mr. Luzzi provides readers with sparkling references to the thoughts of Italy’s greatest writers – Bocaccio, Dante, Leopardi, Lampedusa—in his journey to reconcile the nation’s creative highs and destructive lows. In the process, he reveals how beauty can be both a blessing and a burden.

In time, Mr. Luzzi’s adoration of Italy’s cultural splendors rests side by side with his profound gratitude for the family that offers love and support, especially in the midst of his own dark times.