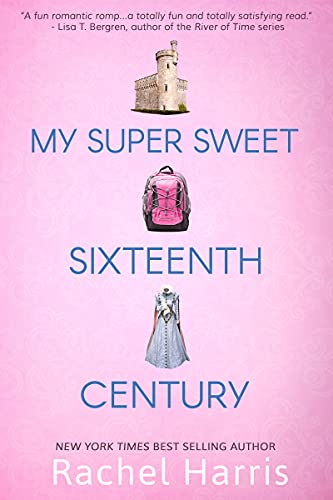 Cat Crawford, just about to turn 16, is not in the mood to celebrate.

Her mother abandoned the family years ago, but the aftershock of her scandalous behavior still smacks Cat squarely between the eyes on a regular basis.

Her dad’s a great guy, but he’s married to a young, overly enthusiastic woman who can’t get it through her head that Cat isn’t interested in welcoming her into the family. What’s a girl to do when clueless step-mommy wants to throw a Sweet 16 party worthy of MTV? Escape—and fast. And Cat manages this feat better than she could have ever imagined.

An unexpected visit into a gypsy tent for a tea reading lands Cat in 16th century Renaissance Italy. She meets her ancestors on dear old mom’s side of the family and her first real crush—the scintillating Lorenzo.

Cat considers that this time-travel trip may not be so bad after all—until an older man sets his sights on her. Almost 16, Cat fits the bill for a Renaissance era wife—something she’s not keen on.

Can she get back to the future before she’s forced down the aisle?

If you judge this book by its cover, you may think it’s a fun, lighthearted affair—and it is, but it’s also so much more. The author excels at capturing a teen girl’s voice, especially one that’s ticked off, struggling with unfamiliar emotions, and trying to find her place in two topsy turvy worlds, both the real and the fantastical.

There are quite a few laugh-out-loud moments as Cat works her way through ancient times with all the cocky, funny wherewithal of a 21st century teenager.

The author did her homework when it came to recreating the era of the Italian renaissance. Readers are given the full flavor without feeling overwhelmed. There is a skillful blending of Cat’s modern sensibilities with those of her teenage Italian ancestors.

As much fun as My Super Sweet Sixteenth Century is, Ms. Harris has managed to touch on heavier topics, but not in a heavy handed manner: abandonment, parent-child conflict, and stepparent relationships.

The novel highlights the relationship between older men and brides who are essentially still children. This can provide a forum for thought provoking discussions about the roles of women during different times in history.

Rachel Harris has skillfully crafted her debut novel. My Super Sweet Sixteenth Century covers a breadth of issues, all in a fun-filled, thoroughly enjoyable package. Best of all, there’s a neat twist to bring readers back for the next saga in book two.