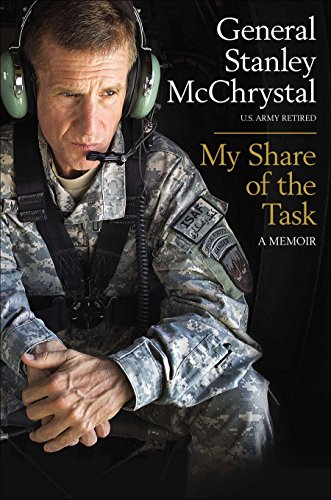 “. . . the grace notes of a storied career, memorably recounted in this remarkable book.”

General Stanley McChrystal’s book, My Share of the Task, is an autobiographical tragedy well written by a legendary American combat leader.

The tragedy is not his 2010 relief from commanding U.S. forces in Afghanistan after indiscreet comments were reported by a journalist seeking “gotcha!” headlines. Instead, the larger tragedy is the backdrop of Afghanistan itself where we squandered American effort, treasure, and blood as well as General McChrystal’s well-honed leadership talents.

Unlike most memoirs by generals or politicians, this one is long on humility and mercifully short on self aggrandizement.

As a West Pointer, Cadet McChrystal was a bit of a rake, disciplined for hijinks that would barely have raised an eyebrow in a civilian college but earmarked him for lesser things in an academy that produces generals.

Fortunately, his strong suits were leadership, a love of history, and the ability to run hard for long distances, lifelong soldierly traits that bleed through these pages.

Although the author doesn’t say so, every step of his steady rise through the ranks of a Darwinian officer corps is remarkable for its distance from the American mainstream. Parachuting out of perfectly good airplanes as a young officer in the famed 82nd Airborne Division was only the beginning.

Promoted to three-star general after years of constant combat in Iraq, McChrystal was “rewarded” with a Pentagon billet where 18-hour days were followed by hurried nights when, “. . . I ate a quick dinner together before I got up the next day at 3:30 A.M. to run to the Pentagon in time to shower, change . . . and then host the 6:30 A.M. stand-up (staff meeting) . . .”
His early experience as a green beret and a ranger battalion commander positioned the fast-rising officer to play formative roles when the Iranian hostage rescue debacle led to the renascence of American Special Forces.

Despite media hype, most Americans have little understanding of how decisive and utterly lethal these forces have become in the wars of 9/11. Picked to command TF 714—the special operations task force headquartered in Iraq—General McChrystal overcame the hydra-headed legacies of interservice rivalry, interagency wrangling, and bureaucratic inertia to integrate operations with intelligence.

While conventional armies are the mother of all hierarchies, terrorists and guerrillas operate as quintessential networks. To track, find, and destroy them, you must first be prepared to do violence to the bureaucracy and to the bureaucratic mindset, to prize and exploit intelligence just as traditional armies instinctively seize high ground.

The best parts of his book are those chapters in which General McChrystal describes how TF 714 became a laboratory for counter-terrorism, much of it focused on the insurgent network headed by Al Qaida chieftain Abu Musab Al-Zarqawi.

Present and future generations of strategists will study this book carefully for its operations maps, cryptic handwritten diagrams, and forthright descriptions of the Find-Fix-Finish-Exploit-Analyze cycles that narrowed and finally unraveled the network of networks hiding the shadowy Zarqawi. Those chapters alone may ultimately place this volume alongside the works of T. E. Lawrence, the great English military theorist and legendary creator of Arab guerrilla networks.

But just as it was for the British, the American problem is knowing when and where to stop because the choice is either killing the alligators (counterterrorism) or trying to drain the swamp (counterinsurgency).

Even though we know what happened, readers will cringe when General McChrystal wins his fourth star but accepts command of the madcap counter-insurgency effort in Afghanistan.

It is tough sledding when he describes the challenges of pacifying Greater Kandahar, “a sub-region formed by the provinces of Helmand, Kandahar, Zabul and Oruzgan whose economies, tribes and politics were interlinked.”

Despite the dubious relation of that forbidding terrain to any conceivable American strategic interest, General McChrystal insisted on getting a feel for this battlefield by patrolling alongside his soldiers:

“Progress couldn’t be measured by direct attrition of a terrorist network. Combat often erupted unexpectedly: A boom or a plume of dust or the crack of bullets from the distance, yelling, rushing to maneuver, return fire, then silence. Then the same thing the next day. And the day after that, until the geysers of dust claimed a friend . . .”

The crosscurrents of farce and anticlimax notwithstanding, it is almost a relief when, in the book’s closing chapter, General McChrystal is relieved of command and ends 34 years of distinguished service.

But one of the differences between the American military and our masters in government and business is that even while fading away we still try to teach lessons. General McChrystal is no exception, including a succinct discussion on leadership as his epilogue.

Undoubtedly intended as a primer for the CEO-clients now under his tutelage, these are the grace notes of a storied career, memorably recounted in this remarkable book.

Colonel Allard (U.S. Army, Ret.) is a former NBC News military analyst and Dean of the National War College. He is a frequent contributor to the Washington Times as well as other publications.