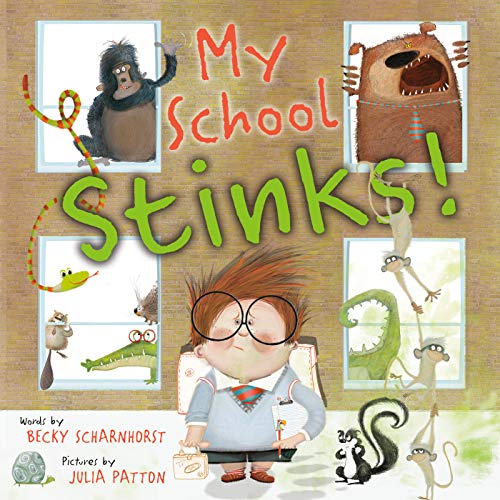 My School Stinks! is about a boy named Stuart who gets sent to a wild animal school by mistake. The boy writes in his diary every day about the day’s events, plus he tells his parents what goes wrong at school each day. They don’t get it.

“Dear diary, I think there’s been a mistake. My desk mate stinks, my locker buddy bites, and my teacher is unbearable.” Yes, the teacher is a bear, wearing a green and red striped necktie. The boy plans to be sick the next day, but his parents don’t believe him, even though the art shows him covered in round red stickers to resemble chicken pox.

The next day the monkeys ask him to play with them, and they let go. The boy lands on a porcupine named Patricia. “Patricia caught me, but I still had to visit the nurse. Here is one of the quills she pulled out. I have 186 more.”

The humor is understated in the text and played up in the art. The diary entries are on lined school paper with important words bigger and in red pencil.

After four double-paged spreads, it is unclear from the art who Ms. Fuzzybottom is. At this point, a quick flip of the previous pages was needed to make sure that the boy (shown and named on the title page) was not the teacher and was named Stuart. Yes, the teacher is a bear, but for a moment, it was confusing. Stuart looking out the window could’ve been Ms. Fuzzybottom. A second look at the art revealed an arrow pointing to the tiny mouse.

The entire story is told in first-person diary entries, with lists and explanations, even a p.s. or two. But Stuart never signs his name at the bottom. A signature would’ve helped with the confusion as to who was writing the diary. Don’t kids sign their diary entries anymore?

Stuart goes on to have fun with Charlie the crocodile, Sam the snake, George the gorilla, and Camilla, the camel. Ms. Fuzzybottom is a mouse (that makes sense now) and Ralph, the skunk.

Charlie asks to have lunch with Stuart, and Stuart wonders if he will be lunch.

Ms. Fuzzybottom goes missing for a short time, is found in the closet, and gets a Welcome Home party thrown in her honor.

The end papers are sky blue with wild white footprints leaving tracks across them.

Any kid reluctant to start a new school will be pleased to read that Stuart makes lots of friends, Charlie becoming his best friend (the lunch date went well).

This debut book by Scharnhorst is innovative and fun, a must for every school library.