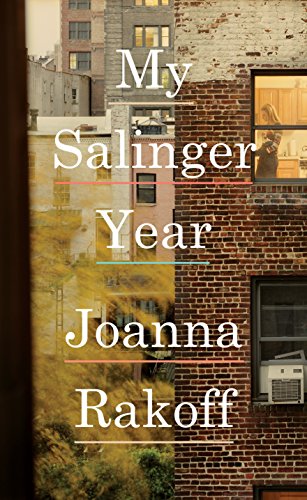 New York in the mid-1990s—not a bad place to be for a young woman with writerly aspirations, especially one who’s found work at one of the city’s many literary agencies.

It was Joanna Rakoff’s dream job. “. . . there were hundreds, even thousands of us, she recalls, “. . . all of us clad in variations on a theme—the neat skirt and sweater, redolent of Sylvia Plath at Smith—each element purchased by parents in some comfortable suburb, for our salaries were so low we could barely afford our rent. . . .

“Years ago,” she wryly observes, “. . . we would have been called secretaries.”

E-readers were nonexistent then; blog was an odd word for a little-known concept; and vanity presses were just that—expensive succor for self-delusional scrawlers.

Publishing was a respected profession, not a pay-as-you-go template on a computer screen (just hit send and it’s done.)

Agents were essential—as integral a part of the book world as the content itself.

“We need to talk about Jerry,” says Joanna’s new boss. “People are going to call and ask for his address, his phone number. They’re going to ask you to put them in touch with him. Or me . . .  Reporters will call . . .  Don’t tell them anything. Don’t answer their questions.”

All becomes clear a little later, when the young assistant notices what’s on the bookcase opposite her desk. It’s a collection of books she’s seen many times before: on her parents’ bookcase, in the English department closet at her high school, at every bookstore and library she’s ever visited ….

“Books so ubiquitous on the contemporary bookshelf I barely noticed them: The Catcher in the Rye, Franny and Zooey, Nine Stories . . .

Her friends are stunned when she tells them:

“Was he nice?” asks another.

“He’s a fucking phony,” insists yet another.

Joanna’s life is precariously balanced between glamor and poverty. Every working day, the 23 year old leaves the plush, wood-panelled Agency (always deferentially capitalized) and goes home to a rundown apartment and a selfish boyfriend—one of those secretly chauvinist socialists.

Responding to Salinger’s voluminous and ardent fan mail is among her duties, though they’re “sort of” the least important. Only answer them when all your other tasks are done, she’s told. They’re just fans.

The form reply, from which she may not deviate, is just as contemptuous: “As you may know, Mr. Salinger does not wish to receive mail from his readers. Thus, we cannot pass your kind note on to him.” It does, at least, offer a thank you for the correspondent’s interest in the reclusive author’s books. What’s not clear is whether or not the author knew quite how cavalierly his fans were treated.

Among the many fan letters are what Joanna comes to think of as the Tragic Letters: “missives from people whose loved ones had found solace in Salinger during their years-long struggles with cancer, who’d read Franny and Zooey to their dying grandfathers,” etc. “And then there were the Crazies, of course, ranting about Holden Caulfied in smudged pencil, a dirty lock of hair falling out of the creased paper and onto my dark desk. But probably the largest group of fans were teenagers, teenagers expressing a sentiment that could only be summed up as ‘Holden Caulfield is the only character in literature who is truly like me . . .’”

Even though they’re given such short shrift by the Agency, she must read every single one, Joanna’s told.

“They’re mostly harmless, but occasionally we’ll get a death threat,” explains a colleague. “Back in the ’60s, Salinger got some pretty scary letters. Threatening him. And his kids. . . . We’ve been pretty careful since the Mark David Chapman thing.”

That thing was, of course, the shocking assassination of Beatle John Lennon. After he’d done it, Chapman sat reading The Catcher in the Rye. Holden Caulfield had made him do it, he insisted.

Be that as it may, Joanna’s heart is tugged by many of the letters she reads. Realising that what most fans want is simply some kind of personal interaction with the man whose books have meant so much to them, she defies the strict instructions she’s been given, and writes her own responses.

Over the course of her year at the Agency, Joanna—who is now a poet, journalist, critic, and prize-winning novelist—“finds her own voice by acting as Salinger’s.”

Does she ever get to chat to the enigmatic author whose life becomes so much a part of her own? You’ll have to read her beautifully crafted memoir to find out.