Music Was IT: Young Leonard Bernstein 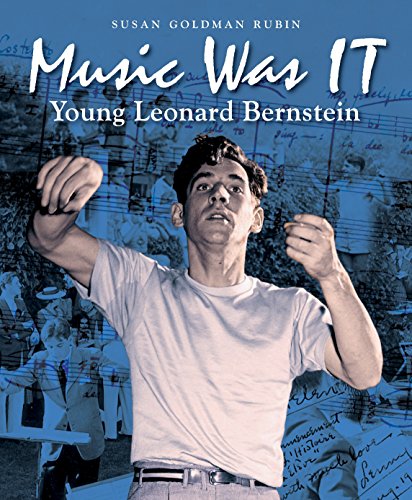 The world of music can be kind of clique-ish. It is a sad, but true, fact. Anybody who has any kind of name in music wants to be friends with everybody else who has any kind of a name in music. The bigger the name the better. Instead of being sad that we are left out in the dreary, silent cold, we music lovers can enjoy a vicarious musical existence through the stories of the lives of these famous few.

Luckily, these talented stars love to have their pictures taken and their stories told. In Susan Goldman Rubin’s latest release, Music was IT: Young Leonard Bernstein, the author tells the story of why and how little Lenny Bernstein, a Russian Jew from Massachusetts, came to love music, study music, and eventually make it his life.

At first glance, the title of the book, Music was IT, seems strange and maybe a little awkward. In this digital age of computers, IT has come to mean Information technology. But Rubin took her title from something Bernstein said after their family inherited a piano from Aunt Clara. “I remember touching this thing the day it arrived,” Lenny later recalled, “just stroking it and going mad. I knew from that moment to this, that music was ‘it’.” “It” meaning his raison d’etre—the driving force that made Lenny Bernstein into the great, world-renowned conductor and composer, the Leonard Bernstein who wrote well-known music such as West Side Story, On the Town, and Candide.

Ms. Rubin’s book is written specifically for 9–12 year olds, but anyone who is curious about Bernstein would do well to check out this book. The author’s writing style is simple and direct but not condescending, and she weaves a compelling story sure to capture the interest of Bernstein fans at any age. This reviewer could not put down the book once started. Ms. Rubin really pulls you into life in the Bernstein household.

In addition, the author has included some great photos of Bernstein’s family and friends, including the immortal Aaron Copland and Rudolf Serkin. As mentioned earlier, Bernstein was THE ANYONE that everyone wanted to meet, and the range of individuals included in photographs with Lenny is astonishing. Ms. Rubin’s book easily holds its own against any “academic” text written about Mr. Bernstein.

Leonard Bernstein has become synonymous with American music. It is almost impossible to have one without the other. Ms. Rubin’s book grabs on to this American legend and presents it to new generation of musicians just starting to explore their own version of the American dream.