Music for the Dead and Resurrected: Poems 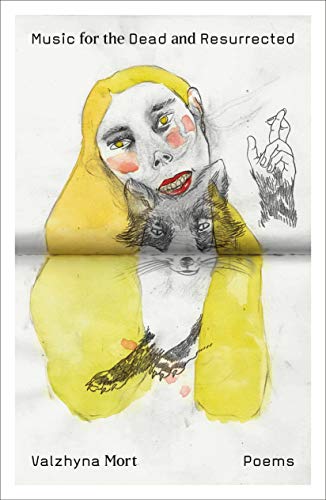 “rather than trying to escape the past, we must instead accept the fact that the past lives with us and within us, and therefore, like it or not, we move back and forth through it daily.”

“The past is never dead. It’s not even past.”
—William Faulkner

Central to Valzyhna Mort’s lyrical and at times surreal third book is the question of remembrance, specifically, how to remember and mourn when the state often demands silence. This hauntingly beautiful book begins with “To Antigone: A Dispatch,” a message, if you will, to someone who put family before state in burying her “criminal” brother in defiance of the state’s laws. In doing so, Mort establishes the narrator’s connection to Antigone and therefore the reader’s connection with a character who refuses to forget.

“Once we settle your brother,

I’ll show you the forests

of the unburied dead.

can clean a house.”

In case we were in any doubt, the second poem, “Bus Stops: Ars Poetica,” gives us a poetic map for the many themes of remembrance and loss in the book and, more importantly, the ways in which the state attempts to re-write memory.

“One by one, streets introduced themselves

with the names of national

We are invited to face the history of crimes that haunt the book’s present. And of course, 20th century history offers no end of crimes, particularly the history of invasions and suppression in Mort’s home country of Belarus by Poland, Nazi Germany, and the Soviet Union.

That said, Mort is not simply writing another history of the worst crimes of the past century, she is creating a mythology for how we internalize those crimes at the individual level, and, perhaps, more importantly, the ways in which we both silence, remember, and re-create them as a result:

“In the purse that held—

of the dead, my grandmother

The image is provocative and not easily solved. Does it hint at individual complicity or is the grandmother simply protecting her grandchild, does she hide the dead or the chocolates, or both? We soon learn that we are all complicit in the ways in which we continue to forget instead of facing the difficulty of memory, particularly memory of trauma. As Mort states in “Genesis”:

the keepers of our dead?”

It is our communal responsibility to place the individual over the state, to put our humanity above the law, to ensure that we do not forget our dead. The recent Black Lives Matter protests and the calls to remember George Floyd, Breonna Taylor, and Ahmaud Arberry, to “say their names,” is nothing less than an acknowledgement of the essential nature of Antigone’s act and the fact that the struggle never ends. Valzhyna Mort’s haunting collection also demands we say their names, that we remember every victim of the state, through the creation of her complex and lyrical mythology of loss—the lost history of Belarus, the lost history of the dead who came before, the lost history of all victims of injustice who must be remembered.

Like Bruno Schulz’ masterful The Street of Crocodiles, in weaving her larger mythology, Mort also colorfully characterizes small town life and its role in creating our personal history.

“In a village known for a large puddle

where all children fall between the two categories

of those who hurt living things

and those who hurt nonliving things.”

The moment from “An Attempt at Genealogy” provides both dark humor and a more intimate picture of the ways in which we internalize the often brutal history of the state. Our personal mythology is never far from the historical. We never really escape the past. It lives with us.

“Under the moth-eaten snow

my motherland has good bones.

My motherland rattles its bone keys.

A bone is a key to my motherland.”

In what is arguably the central image of the book, Mort makes it clear that we not only can’t escape the past, we are surrounded by it each and every day of our lives.

the roofs are folded.”

It is in these houses of the dead that we live in Mort’s lyric poems, and it is here that her mythologizing genius is most profound.

“What has been done to us is muddled with the fears

of what could have been done.”

yet not. Your bones in the womb of the grave,

yet not, a hungry boy with a book, in a mass burial

next to your twins-in-death. Your name,

which sounded foreign to them,

is changed for a Russian name

in an act of un-baptism.

When you go hungry for months,

your heart is a red bone.

All I see when I open a book is your empty stomach.”

We are, all of us, one, the living and the dead, the suffering and the healthy. We cannot separate ourselves from the past or from the suffering of another human being. In this way, like Antigone, we have a responsibility to each other that goes beyond the laws of the state, a higher morality than “law and order.” A powerful message for these times when a recent survey showed that almost two-thirds of millennials knew nearly nothing of the Holocaust and when fascist messages are heard more and more often in our own country.

What is stunning about Mort’s poetry is the way in which she maintains that careful weave of the personal with the historical, and nowhere is that more clear than in the short prose section entitled “Baba Bronya” that anchors the middle of the book. It’s addressed to the narrator’s grandmother:

“As I eat my lunch, you talk, with gusto, about hunger. When I complain about my unfashionable clothes, you laugh remembering your wedding—you borrowed a white robe from a nurse to wear as a wedding dress. When I beg for privacy, you ask: “Did I tell you about the day the Bolsheviks came to take the roof off our farmhouse?” Or worse: “Did I tell you about the house where my mother died right after sending my brothers and me to an orphanage?” “Did I tell you about how Uncle Kazik died?” “Did I tell you how the Soviets took my father twice, and since he did return after the first time, I didn’t cry a bit when they took him the second time? . . . All your stories feature this moment—whether it is a story of hunger, bombing, exile, sickness or death—somebody always stops by to tell you how pretty you are.”

The historical intertwined with the personal, the brutish and inhumane wrapped up in the all-too human, this is the mythology of Valzhyna Mort. A poetry that demonstrates the complexity of human experience. The grandmother is also a figure who moves freely between worlds.

“Why not, you are always reliable for casually dropping facts about the afterlife as if you could enter and exit the afterlife right from your kitchen.”

The image of the grandmother as a sort of Orpheus offers up another mythological antecedent. Orpheus was a traveler who moved between the lands of the living and the dead. He was also a singer and poet, one who, like Valzhyna Mort, took it upon himself to remind us there are things we dare not forget, that rather than trying to escape the past, we must instead accept the fact that the past lives with us and within us, and therefore, like it or not, we move back and forth through it daily.