Murder at the Royal Botanic Gardens (A Wrexford & Sloane Mystery) 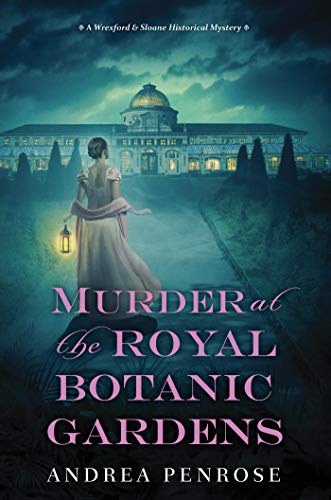 “For relaxed enjoyment and the diversion of adept time travel, an Andrea Penrose historical mystery is hard to beat!”

The fifth in Andrea Penrose’s Wrexford & Sloane historical mystery series, Murder at the Royal Botanic Gardens, brings the Earl of Wrexford and Lady Charlotte Sloan into the home stretch, approaching their Regency-era wedding in London. These two nicely layered characters have solved many a murder together already, in collaboration with the smart people who work for them and a pair of clever young street lads that Lady Charlotte has adopted as wards.

But holding themselves in the light of “Society” through the last weeks of unmarried life is critically important to the positions they’re soon to hold. Readers of Penrose’s series already know (and new readers can quickly absorb) that Charlotte’s risk-taking personality and abundant loyalty have made trouble for her in the past. Should “Society” get wind of the scandals behind her, she won’t make a suitable bride for the earl; on the other hand, once they are wed, her past can’t seriously damage her.

So the pair, and their households, have carefully planned a set of social appearances, to reassure any critical eyes around them. It’s not their fault, of course, that murder falls into their paths at the first of those events, a posh celebration prepared for the many “nobles” who dabble in citizen science or invest in scientists and their potential. At the Royal Botanic Gardens in Kew, rare blooms flourish as a striking backdrop.

Yet a murmur from the Royal Society’s secretary is enough to put both lovers on the alert: “‘Forgive the interruption, sir.’ The look of alarm in his eyes belied his smile as he drew Wrexford aside. ‘But might I ask you to come with me to the conservatory. There’s been an . . . unfortunate mishap.’”

With the high visibility of their approaching nuptials, Charlotte and Wrexford could understandably turn down this plea for assistance in solving a murder and stilling the ripples of crime spreading around it. But one of the charming aspects of this series, beyond its romantic strands and delightful across-class conversations and loyalties, is the presence of Charlotte’s two rapscallions—that is, the young boys who are her wards. And since one has been a possible witness to the murder, neither adult is going to back away from resolving it.

Murder at the Royal Botanic Gardens offers a well-spun historical mystery with a nice assortment of factual details, period cuss words, and insight into the science and medicine of the time. In contrast to the current tradition of “cozy” mysteries, neither Charlotte nor Wrexford stumbles into poor decisions. That makes it a pleasure to watch them peel back the layers of graft and deceit related to botanical discovery of the period. Moreover, their interactions with the boys, nicknamed Raven and Hawk, are charming and affectionate and add an unusual spice to both the passions and the discoveries of Penrose’s mystery.

For relaxed enjoyment and the diversion of adept time travel, an Andrea Penrose historical mystery is hard to beat!