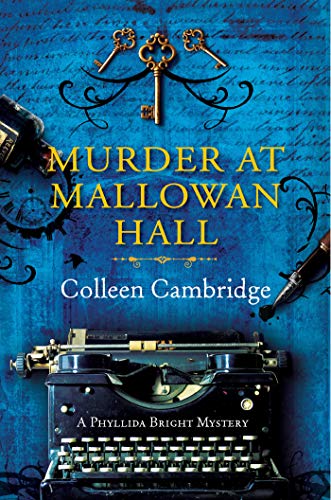 “Colleen Cambridge has done her homework on English society and provides us with a clear picture of her characters, where they live, and how they act.”

As cozies go, Colleen Cambridge’s new book, Murder at Mallowan Hall has all the right material. Set in post World War I England, Cambridge does a good job of creating believable characters and establishing a believable setting.

The heroine is Mrs. Phillida Bright, housekeeper at Mallowan Hall, the home of Agatha Christie and her husband, Max Mallowan. Phillida is a mystery unto herself, ageless and secretive about her personal life.

The murder victim, Mr. Charles Waring, is at the estate under dubious circumstances. He claims to be a journalist there to interview Ms. Christie, but that is soon discovered to be a lie.

As most cozy heroines have a lesser character sidekick to bounce ideas off of, Phillida has the excellent Agatha Christie, who is more of a friend than an employer.

At the very opening, when the body is found in the library, Phillida contacts the local police who do not initially believe her. These are the requisite, somewhat inept police officers, one local constable Greensticks, and the other a Scotland Yard detective, Inspector Cork. She pulls rank as the housekeeper for the Mallowans, and the authorities appear quickly to take over. Although the officers are responsible for the investigation, and they attempt to keep her out of their investigation, Phillida does not give up the reins so quickly, and she begins her own search for clues, eyeing the guests to see who would be the most likely to murder a total stranger.

Phillida’s nemesis is Mr Dobble, the butler of the estate who doesn’t care much for frills and is easily annoyed when he perceives that Phillida is stepping out of her position’s bounds.

Cambridge has also established a good set of suspects in the guests at the Hall for a weekend social gathering. The secondary characters are primarily those employees who serve their employers and their guests. While, for the most part, they remain quietly in the background, Cambridge brings them forward with clues and insight enough to help Phillida solve the case.

The guests at the Hall include Mr. and Mrs. Devine—a handsome couple with secrets not to be shared. Mr. and Mrs. Budgely-Rhodes, a fussy couple, or are they?; Mr. and Mrs. Hartford—covering their own secrets; Mr. Grimson, a recent widower; and Mr. Sloup, a man whose hands roam too freely.

Phillida soon discovers that she has more than enough suspects to fill an Agatha Christie novel. Cambridge makes a point of allowing her protagonist to search rooms, discover clues, and begin to piece the puzzle together.

This is the first of the Phillida Bright series, and Cambridge has set the table for a possible romance between Phillida and Bradford, the chauffer; or Phillida and Dr. Bhatt, the attractive town physician. Lots of possibilities.

In creating the story, Cambridge brings in a variety of red herrings, clues, and foreshadowings—enough to throw the reader off track, but enough to let the clever reader make some decisions. Throughout the story, Cambridge gives us infidelity, two murders, and a cadre of juicy situations to keep us turning the page.

It should be noted that Cambridge has a habit of incorporating parenthetical asides that add nothing to the story and would be better left out. Having said that, if the reader skips over these items, the read will take them to a satisfying end, which is a good one, with the typical unsuspecting guilty party uncovered at a gathering of the suspects.

Colleen Cambridge has done her homework on English society and provides us with a clear picture of her characters, where they live, and how they act. She does well at capturing the era with all the right language and dialects. It’s a good cozy to read with a cup of tea on the patio.