A Murder on London Bridge (Exploits of Thomas Chaloner) 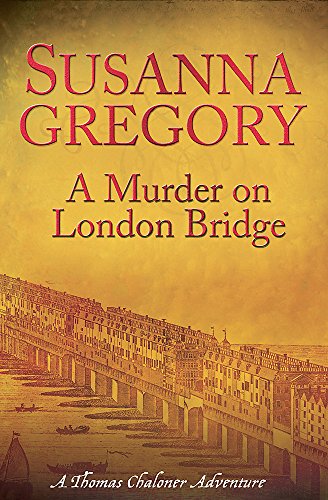 A Murder on London Bridge is the fifth of Susanna Gregory’s Thomas Chaloner series. These stories portray post-Restoration England in all its confusion and contradiction. As a former police officer turned academic, the author is well qualified to take us back in history and into the darker side of that period, creating another signature “historical whodunit.”

The year is 1664. The terrifying days of Oliver Cromwell have passed, and Londoners have openly returned to celebrating Christmas and other practices that were banished when the Puritans held more sway. Charles II has been settled into the restored monarchy for a few years; it is not a peaceful time, however.

Church wars are at the heart of the dissension, which is primarily Anglican vs. Catholic, but Puritans are seething, and iconoclasts are still bent on destruction of ecclesiastical excess. Charles II, despite his promise of religious tolerance, has caved in to pressure and gone back on his word. He and his Chancellor fashioned the infamous Clarendon Code, a set of laws with increasing restrictions and discrimination toward any non-Anglican.

Rumors of rebellion swirl as much as the angry Thames under London Bridge. Meanwhile above the river, the Earl of Clarendon, King Charles II’s Chancellor, crosses the bridge trying not to pay attention to the heads of dissenters impaled on the stakes that punctuate the thoroughfare. It was he who urged the king to display them, serving as an example to anyone who acts out against the monarchy.

The Earl of Clarendon finds himself in the predicament of needing to spy on his opposition. His long-time assistant, Thomas Chaloner, has been busily occupied in this role since the Monarchy was restored and is no stranger to the discontent whispered about on the streets and in the bakeshops, brothels, and coffeehouses. Chaloner is always in trouble with his boss, who feels he is not doing enough to uncover the roots of the many problems that are plaguing the Monarchy. There is little Chaloner can do to quell the Earl’s sense of foreboding.

Chaloner is both a likable and nimble protagonist. He is also remarkably intuitive, knowing how far he can probe a witness for information. He might bully a beggar for information, then compensate him with money and his own cap as the winds howl on the bridge. He dodges bullets and daggers with alacrity, yet enjoys returning to his humble rooms to feed his cat and play his “second best viol.”

Slowly piecing evidence together, he learns more about the uprising that is afoot. His investigation of a murder, which he witnesses, links to a series of suspicious incidents. Tension builds up to Shrove Tuesday, a time when great destruction is rumored from more than one source. It is up to Chaloner to root out the perpetrators and prevent damage and death to many on both sides of the argument.

Ms. Gregory is skillful in her portrayal of this contradictory time. The reader might find himself in the middle of it all and feel the need for more historical background, as I did. The cast of characters exceeds thirty and sometimes makes the plot hard to follow. Ms. Gregory identifies the characters’ relationships frequently, but even this is not enough to prevent interruption to the flow of the story.

While the extensive development of plot and characters adds to the story’s background, it also serves to bog down the pacing, especially midway through the book. The story would have benefited from tighter editing. Too often, we find Chaloner off on another investigation which leads to a dead end, or provides little that contributes to the final outcome. Still this reviewer came away feeling challenged, having learned a lot about the period.

Reading historical novels of this depth requires the reader to think and reason. Being familiar with the other books in the series is helpful, but is not essential. If the reader pays attention it is possible to learn about post-Restoration England, the Reformation, the iconoclasts, pre-plague and pre-fire London of the early 1660s, and what it was like to live during that time.

Those who are acquainted with Thomas Chaloner will not be disappointed to meet him again as he ferrets out the culprits and seeks to thwart further disaster.