Mozart: The Reign of Love 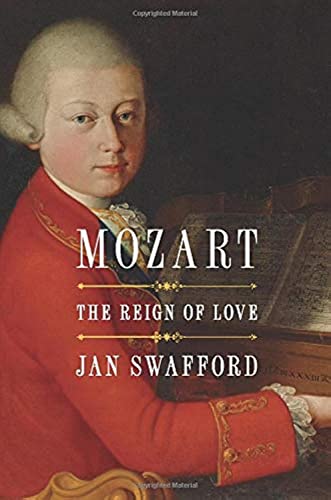 In Mozart: The Reign of Love musical historian Jan Swafford dispels the myths and popular lore about Mozart in Peter Shaffer’s hit play and movie Amadeus. Swafford proves in his biography, subtitled The Reign of Love that nothing in the composer’s life needs to be uber dramatized, the simple facts are compelling enough.

Swafford paints a revelatory portrait of the man, his music, and his times, Mozart’s life was full of highs and lows, personally and professionally, but he embraced it all and turned it into his world of musical art, as composer, conductor and virtuoso musician, and the world has been discovering ever since. In his 35 years he composed masterpiece operas, symphonies, concertos, masses, and chamber works.

His father Leopold was a famed violin teacher, but lowly court composer, immediately recognized that his was a musical genius. Wolfgang was playing the harpsichord by age three mimicking every style by ear, by age five he was composing and improvising like a baroque jazz pianist on the clavier, fortepiano, and harpsichord. The prodigy also taught himself to play the violin (and viola); at 13 he wrote his first opera.

Leopold exploited his son’s talent from the start. He was a demanding taskmaster and by all accounts, Mozart tried to remain a most dutiful son. His sister Nannerl, was also a gifted harpsichordist.Mozart’s mother, Maria Anna, was also put to work in the family business, in charge of the household and musical business matters that Leopold couldn’t get to.

Often expecting their presence during a concert payment enough for musicians, or often not paying with florin, marks, lira but with snuff boxes and jeweled trinkets, Leopold kept these for his own private coffers to sell for the rest of his life, never letting either of his children directly receive money that they earned. Both Mozart prodigies almost died of smallpox; Wolfgang at one point had frostbitten hands as Leopold traveled from Germany, Austria, Britain, France, and Italy, month after month.

Nannerl was already being pushed to the sideline, no longer a draw and not taken seriously beyond decorous entertainers. Leopold expected her to marry into money. Swafford sets the rhythm of the book in his compelling chronicle of their tours of the capitals and courts of Europe, trying to make a living and establish Wolfgang’s career.

Spurred on by his father, Mozart was instructed to achieve the highest court positions as composer and clavier player. Mozart mastered much of the classical repertoire and developed it in unprecedented dazzle as a composer and star performer.

Swafford describes Mozart’s early approach to composing as weightless, light, and accessible to everyone. The author also makes notes that it is impossible to convey what music is in words, outside of the musicology—and the author does just that, exhaustively—to document Mozart’s compositional development and artistic forensics.

Swafford also chronicles the circumstances of key performances and the backstage dramas that inevitably occurred as composers, musicians, and singers performed in private salons, royal courts, and churches at the behest and whims of the ruling class.

But he was so talented that he was, as he matured, viewed as a rival for court musician posts and especially opera houses, where even his early operas, written when he was just reaching puberty were hits. Mozart also was expanding techniques of orchestral music to opera, and vice-versa, busting open the staid musical templates of both.

At 14 he premiered his first opera, Miridate in Italy, with the support of Italian master Florian, who graduated him with a hand on the scale, knowing that Wolfgang was eminently gifted. He also studied there at a conservatory and soon enough top singers, including castratos, and opera divas wanted to sing his arias.

Wolfgang and Nannerl for many years were each other’s confidants, as Mozart continued touring, they wrote each other obsessively about everything. When his daughter was reaching adulthood, Leopold didn’t take his wife or daughter to continue touring with them, considering them extra baggage.

Wolfgang and Nannerl wrote to each other continuously. Just reading their correspondence fills in a lot of dimension to who Mozart really was, past the myths. His letters to his father are particularly illuminating, with Swafford providing incisive context about the private dynamics of this family, as well as their relatives.

The young Wolfgang had already produced a string of commercially successful operas, Leopold was still not successful in getting him a court appointment. At 16, Wolfgang was at the mercy of powerful archbishop Colorredo, who controlled court appointments and kept Mozart on the back bench.

Meanwhile, at the Austrian court of Joseph II the conventional composer Antonio Salieri was the most successful and favored opera composer in Europe.

Leopold was so desperate to get him royal court commissions, bungling any hope of them with forged letters in Wolfgang’s hand, the archbishop saw through this and threatened to cut them loose altogether.

For most of his professional life Mozart was essentially a freelancer, performing for aristocrats; sometimes his pieces were performed just once. But his workaday music was for him daily a creative lab to stretch his musical imagination as he started to compose more defining orchestral works. Amid all of the court intrigue and family drama with Leopold’s exploits, Mozart didn’t let anything stall his artistic development.

He was admired for his talents by such musical titans as Joseph Haydn, Christophe Willibald Gluck, J. S. Bach, and composers in Italy.

By his early thirties, Mozart was ignoring his health; he was a prodigious gambler, which caused him to have to borrow money, which furthered his debts. Infant mortality was common in the later 1700s, and his wife Constanze had two sons that survived, but they buried several of their children before they became toddler age. Between difficult pregnancies Constanze often ill, that rendered her bedridden, but she survived into her 70s, and managed the preservation and musical estate of her husband.

And at 35, the last year of his life, he worked through what was to be a rapid decline of his health, and Swafford examines all the circumstances of his premature death. Mozart was optimistic about his career for once, with more appointments and commissions, and was planning for more expected success, with many compositions in the works.

Throughout their careers Salieri and Mozart were merely professional rivals, but the rumors that Salieri’s had poisoned Mozart was runaway gossip in the immediate aftermath of Mozart’s death, and Swafford puts the lore to rest in this volume.

His final major works are The Marriage of Figaro, Don Giovanni, Cossi Fan Tutti and The Magic Flute and his Requiem, which he was trying to finish on in his deathbed—all masterpieces that ushered in a new era of opera for the next century. The granular detailing all of the plots and characters can be heavy going, and weigh down the flow of the biography. Although, Swafford account of the operas, particularly Don Giovanni, with infamous libertine Casanova on the scene with rakish librettist Lorenzo Di Ponte, swirling around a driven Mozart, is riveting backstage operatic drama.

Biographer Swafford sums up Mozart’s artistry and legacy in the final chapter. “As he reached toward new territories, his art found a consecrated beauty that rose from love: love of music, love of his wife, love of humanity in all its gnarled splendor, love of the eternal yearning for God in the human heart. His work served all that.”