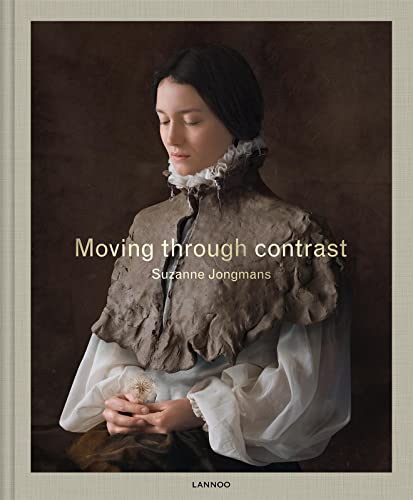 “Jongmans is knowledgeable about art history and passionate about combining the issues of the past with those of the present and pulling them into our modern sphere.”

In the spirit of chiaroscuro, contemporary Dutch artist Suzanne Jongmans has developed an entire photographic oeuvre around the contrast of light and dark. However, light/dark is not the only contrasting element in her work. Moving Through Contrast demonstrates the depth of paradox, revealing a sensitive, thoughtful, and highly creative individual.

Jongmans invited guest writers to reflect on her personal biography and her artistic vision, which has mixed results. On the one hand it is a gesture of humility to relinquish the pen in one’s own monograph and allow outsider input. On the other hand, it is not clear who these authors are, what their relationship to Jongmans is, or what their own basis of expertise might be. Perhaps they are more common names in the Netherlands, and it is only U.S. readers who will be at a loss.

The first article gives the reader some of Jongmans’ history: what her studio is like, how she behaved as a child, her artistic interests, her choice of subject matter, and her spiritual inclinations. Written in an odd grammatical style, this essay reads more like a movie script where all the scenes from the past are written using present tense as if providing instructions for the actor who will be portraying Jongmans. Possibly this is intentional; possibly this is due to the English translation. As nice as it is to learn Jongmans’ story, the byproduct in either case is unsettling and distracting.

Four sections of photographs hold examples of the series of projects Jongmans has undertaken. Equal part textile-costume designer and photographer, Jongmans painstakingly sets up and masters each shot. Using recycled material, found objects, and packaging supplies she hand-makes the “clothing” her subjects don.

In style with the Old Masters Dutch Golden Age painters like Van Eyck, Memling and Van der Weyden, Jongmans recreates their traditional atmospheres and turns them into modern statements. For instance, one portrait of a young women mimics the bride from the Arnolfini Portrait painted in 1434 by Van Eyck. Jongmans sewed together a spring-green dress from a felt blanket which she wraped around her model. “A bi-conical ‘hennin’ hairdo . . . pinned with a cointoise hemmed with floating polystyrene balls,” completes the outfit. The evasive yet serene facial expression gives mystery to the scene titled, Holding Space.

Turning trash into honorable statuesque images is the new “fashion” and Jongmans has fully embraced her medium. She combines elusive elements such as a serious disposition with a lighthearted spirit; a weighty clay cape with breezy linen shirt; a fragile bubble-wrap dress with a sewing needle poised nearby ready to inflict some damage. Every detail is yet another juxtaposition that can quickly turn the observer into a political, environmental, and social economy analyst as they ponder the meaning of these comparisons to broader issues of humanity.

Each image is presented in full color reproduction and is hauntingly beautiful. Over 50 images are included, and the set is capped off with photos that lend insight to Jongmans’ artistic process. Although she does not include a picture showing herself manipulating the photos with her editing software, she claims that she spends just as much time editing as she does sewing.

As detail oriented as Jongmans is, certain aspects of this project feel overlooked. The text layout of the essays does not follow the industry standard margin spacing and paragraph justification schemes used in most professional monographs. The section heading pages are inconsistent with blank pages included at times where none are necessary, and no separations allowed where one should be. Captions for the images are likewise inconsistent, and we only learn their titles in the index at the end.

We also are not provided the size, location, or dates of any of the images as is standard in many fine art books. The lack of attention to these design details makes the book’s production feel amateur. This is unfortunate and does not match the high quality of the photographic artwork, some of which zooms in on amazing details of Jongmans’ costume craftsmanship.

In spite of some of the unusual choices, Moving Through Contrast has some nice touches and presents an artist who is sincere and honest in her work. Jongmans is knowledgeable about art history and passionate about combining the issues of the past with those of the present and pulling them into our modern sphere.