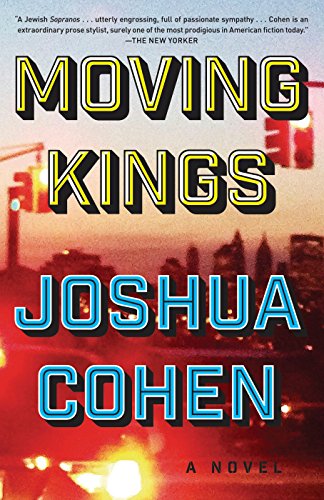 For the past two decades Israeli companies have dominated the moving industry in New York City, and the sight of Israeli men in their early 20s loading furniture and belongings onto or off of trucks has become commonplace in its streets. Most of these young Israelis have just completed their compulsory army service and are earning funds to travel to exotic locations before attending university and/or beginning careers and families.

Living in “a country you can’t drive out of” makes overseas travel particularly appealing, as Joshua Cohen explains in his new novel Moving Kings, which explores the Israeli backstories and American experiences of two such recent IDF veterans working in New York’s moving industry as well as that of their American Jewish employer. Cohen, whose Hebrew is fluent, builds his imagined tale on a foundation of extensive research both in Israel and in New York’s moving industry.

Though Moving Kings is considerably shorter and more accessible—with less erudite but nonetheless stimulating vocabulary, similes, and fewer stream of consciousness run-on sentences—than Cohen’s previous novel Book of Numbers (also reviewed on NYJB) it, too, skillfully weaves descriptive character portraits and plot lines into a novel of ideas that addresses issues as diverse as capitalism, gentrification, army veterans, the IDF’s conduct in the West Bank, and Jewish identity with sharp sardonic humor.

The novel’s ideas are conveyed via analogies, such as military home invasions and post-foreclosure evictions:

“Also, in the IDF they’d been able to smash things. If they bumped into a Palestinian chair or desk or even a human intact, they could smash it, they could call in a convoy of Doobi D9s to dismantle and raze, or a formation of F16s to fly in and cave the roofs and blast the walls into sand and sprinkle the foundations with phosphorous—but here in New York, they had to salvage.”

Some of Cohen’s unusual vocabulary words are reminiscent of more common ones, such as clement (the opposite of inclement), and his Israeli characters’ Hebrew is usually followed by a translation and sometimes a paragraph long explanation of the literal and colloquial meanings of a modern Hebrew phrase. Even where a Hebrew word is not translated, as in “it didn’t always go, or didn’t always have to go, kiss, kiss, tits, dagdagan,” readers may sense the progression of foreplay and thus infer that dagdagan is Hebrew for clitoris.  Some of Cohen’s longer paragraphs seem like they could have started out as long single sentences that have been chopped up and punctuated with periods.

The third person narration is divided among the perspectives of four characters and three main plot lines: David King, politically conservative child of a Holocaust survivor, inherits and expands his father’s New York City moving and storage company into the eviction and salvage business and from the five boroughs into the suburbs; Yoav Matzav, grandson of David’s Israeli uncle Shoyl/Sha’ul (the Yiddish and Hebrew equivalents of Saul), comes to New York after completing his compulsory army service to work for King’s Moving and eventually is joined by his squad mate Uri Dugri; and Vietnam War veteran Avery Luter/Imamu Nabi, an African American Muslim convert and Port Authority toll collector who loses the house he inherited from his father after missing numerous mortgage payments.

Like Book of Numbers there are plenty of biblical references, but this time they refer to the King David stories in First Samuel rather than the fourth book of the Torah. Cohen’s characters’ names are the same or resemble their biblical counterparts, but the analogies are not intended to be strict correlations.

For example, David King’s first cousin once removed Yoav, an unremarkable IDF grunt and later King’s Moving’s newest and least senior employee, only ironically correlates to the biblical Yoav, King David’s top field commander and domestic enforcer, while his surname Matzav means “situation,” which when preceded by the definite article means the ongoing conflict with the Palestinians. Since Avery Luter/Imamu Nabi’s Arabic surname means prophet he might call to mind to the biblical prophet Nathan, a provocateur who arouses his country’s conscience.

We first meet an uncomfortable David, recently divorced with new hair and dental implants, self-conscious of his poor education and recent wealth at a mostly WASP Republican party fundraiser in the Hamptons, the kind of social situation in which he would “become not servile exactly, but docile, tamed. A Jew.”

To his Ivy League educated fellow guests what “he was, then, was local color, just out of his locale. They probably thought he was physically tough. They probably thought he was in with the mob.” And it is here that he meets Fraunces Bower III, a real estate mogul whose company Bower Asset Management will employ King’s Moving on an eviction and salvage job late in the novel into which the three plot lines converge and that brings the narrative to its volatile dramatic climax.

David is a corrupt businessman who allows his shady but loyal employees to steal customers’ belongings and occasionally does so himself. His marriage ended because of his ongoing affair with his office manager Ruth, an office wife whom he has no intention of marrying. He first meets a juvenile Yoav on a short trip to Israel to set up an illegal overseas tax shelter and is shocked by Yoav’s parents’ modest apartment, car, and lower middle class standard of living, and yet he considers their Jewish identity more authentic than his own.

A decade later when Yoav arrives in New York David tells him,

“. . . unlike me, Yo, you’re a real Jew. This is who you are naturally, grown up from the land. And now that you’ve paid your dues to that land, now that you’ve suffered for the state, you’re out, you’re here, and you have to understand the significance. Here in America, a real Jew like you is going to have to find his own thing to prove.”

When Uri joins him in America Yoav tells him that Americans, particularly young American women, will see them either as victims of Arab terrorism and anti-Jewish hatred or as perpetrators of human rights violations who are privileged enough to have extracted themselves from an illegitimate country. Earlier a newly arrived Yoav, whose Arabic is better than his English, hides his Jewish identity for the first time in a Queens Arab deli where he refers to himself as Ahmed from Al-Quds (Jerusalem in Arabic), and later Uri will also try to pass as Palestinian in a Jordanian owned deli.

In the IDF Yoav was no more than a mediocre soldier unlike Uri who excelled at military life and work and reached the rank of corporal by the time of their discharge. But Uri doesn’t adjust to civilian life and winds up in New York where he speaks no English and is dependent on Yoav whose English is still ungrammatical. Why didn’t Uri reenlist in the IDF as a career soldier? Neither Cohen’s narrator nor his characters even mention the possibility. Uri’s behavior in the novel’s climactic scene is not credible and yet is indispensable to that powerful passage.

Uri and Avery/Imamu are both maladjusted army vets who find themselves in precarious circumstances both because of their countries’ neglect and their own shortcomings. Cohen’s politics appear to be liberal and Zionist: having strong ties to Israel while opposed to the Occupation there and predatory capitalism here, but like its fluid biblical analogies the novel defies any one definitive allegory. Moving Kings is an accessible introduction to Cohen’s longer fiction that rewards rereading.