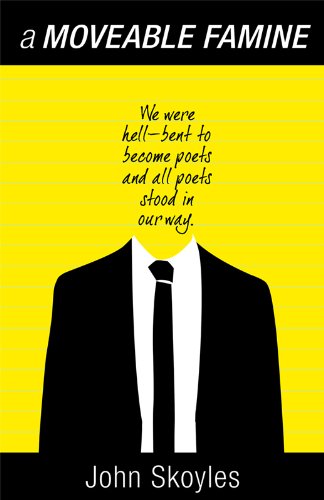 “His narrative feels alive. And satisfying, too. If not a feast, no famine, either. Recite his words aloud and a reader tastes them on lips, teeth, tongue. Yum.”

John Skoyles’ “autobiographical novel,” A Moveable Famine, whose title pays ironic homage to Ernest Hemingway, illuminates one poet’s journey from his childhood affinity for verse to a life devoted to its crafting.

A series of anecdotes both laugh-out-loud humorous and searingly poignant, Skoyles’ narrative is at once fast-paced and poetic. From a Queens childhood to an all-male Jesuit university in Connecticut, at Iowa’s competitive workshops and storied bars, in Provincetown with poetry’s aspirants and gurus, and finally to a long professorial career, the narrator relates his personal and professional comings of age.

He does so within the tumultuous contexts of the Vietnam conflict, a sexual revolution, and thoughtful reassessments of his traditional upbringing while among the practicing literati.

While competition reigns supreme in Iowa, generosity prevails in Provincetown, though both locales serve up a handful of revered mentors (Harvey and Lawson in Iowa, Kunitz in Provincetown), temporary lovers or longed-for bedmates (Jeanne the former, Belinda the latter), rivals-turned-friends (Barkhausen and the dead-too-soon McPeak), and—oh, yes—lines and lines of verse.

Skoyles is both modest about his accomplishments and adept at noting them in understated prose:  “I met with Stanley [Kunitz] when he came to judge the applications. He said he heard I had a lot of girlfriends. I joked that I loved women. ‘You must love poetry more,’ he said.”

Of his yearning to impress and bed Belinda Schaeffer, he writes:  “Everything she did was refined, calm and graceful, but the careless way she placed her books on the bar, almost recklessly, gave me hope that perfection was not something she demanded from others. She might tolerate someone like me, common as well as harmless, like a water stain.”

A particularly poignant series of episodes in the narrative illustrate the devoted relationship between Skoyles’ poet/professor Lawson and a maimed dog named Uncle. As Lawson’s assistant, Skoyles finds himself clipping the dog’s toe nails, his own relationship with his mentor deepening as he realizes the depth of emotion Uncle evokes in Lawson. Lawson both covets and endures the pain the dying dog inspires. And Skoyles tells the reader “Uncle left behind a scent like a rainy day in autumn—decay, wet leaves and mud.” Both the man/dog relationship and Skoyles’ reflections about it remind the reader that poetry lurks about the mundane and the daily.

While at Iowa, Skoyles still reacts with surprise when a woman named Wendy refers to him as a poet. He shows his friend Ridge acceptance letters from Chicago Review and Poetry Northwest. When Ridge smiles, Skoyles reveals his own tentativeness, telling the reader: “I needed the physical proof for myself.  Everything else about poetry was invisible—it wafted around and and sometimes through us. So seeing a concrete thing, even a slip of paper I’d toss to the wind on my way home, and even if that paper clung to the base of a litter basket, it was no longer an idea or a feeling, but something real.”

Fame, or its more modest brothers, respect and admiration, pop like air bubbles above the narrative’s ebb and flow. Men and women who have been elevated to “personages of poetry” visit classes, declaim and sometimes ape at readings, and mingle some or intimately with their prodigies. They are, to the narrator’s eyes, feasting. But Betty, an instructor at Dallas’s McGuire University, where Skoyles first teaches, is nearly starving. She tells Skoyles she is retiring:  “Over the years she had occasionally taught composition, until displaced entirely by those from Yale. She stared glassy-eyed out the window and quoted Gogol on his stint as a university professor with words that scorched themselves into my [Skoyles’] brain.—‘Unrecognized I mounted the rostrum, and unrecognized I descended from it.’”

Recognized for sure, and perhaps one day to join the lexicon of the most anthologized, John Skoyles, poet, editor of Ploughshares, and Emerson College professor inhabits and influences the world of verse. In his poem, “Autobiography,” printed in The New Yorker (March 31, 2014), he writes: “I did not lead my life/although my life followed me,/. . . Yes, it rained/but there were not a lot/of tears,/only a very large one/breaking over everything.”

Like readers of A Moveable Famine and his assorted verse, this poet/professor/man dwells in the certain uncertainty of human life. Perhaps he is sustained by his mentor Stanley Kunitz’s mantra, “When we are uncertain, that’s when we are most alive.”

His narrative feels alive. And satisfying, too. If not a feast, no famine, either. Recite his words aloud and a reader tastes them on lips, teeth, tongue. Yum.