Mothers, Fathers, and Others: Essays 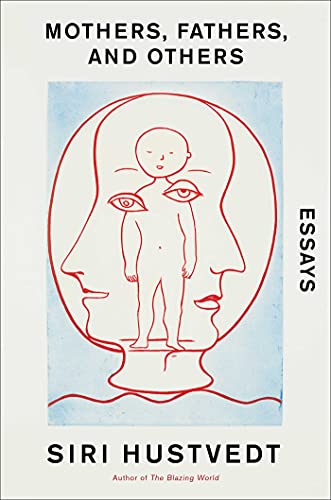 In her most recent collection of essays, Siri Hustvedt provides a feminist analysis of a range of materials drawn from her own family life (particularly the intimate relationships with her grandmother and mother); from her deep knowledge of some of the great women of literature and visual arts (Jane Austen, Emily Brontë, Louise Bourgeois); and from her experience of misogynistic treatment by many men and some women, despite or because of the fact that she possesses an authoritative, independent voice based on many years of study and hard work.

Among the most interesting of these essays are “A Walk with My Mother” which is self-explanatory; “Both-And,” an examination of the philosophy and work of Louise Bourgeois whose 1990 version of her etching “Self-Analysis” features on the cover of the book; and “What Does A Man Want,” where she explores misogyny rooted in binary thinking about Nature/Nurture, Body and Intellect, Man/Woman.

Early in the first of these essays Hustvedt states that her mother “is not ‘The Mother,’ an archetype or cliché that inevitably shows up when mothers are invoked, a person squeezed into male/female hierarchies or the cult of Great Mother, or the Virgin Mary, or Mother Nature, or the mother of soft-focus advertisements in parenting magazines. And yet mother ideas invade mothering with a stark morality of good and evil that rarely touches fathering.”

Nevertheless, Hustvedt’s mother seems to have demonstrated a number of archetypal characteristics, such as giving birth in a squatting position and without anaesthetic, and her passionate attachment to the memory of the babyhood and infancy of her children. She was also a skilled and devoted housewife “a mother who in many ways fulfilled a fantasy about mothers propagated in postwar mid-century America.”

During her marriage Hustvedt’s mother seems in fact to have been, archetypally again, under the influence of The Feminine Mystique so convincingly delineated by Betty Friedan in her book of the same name, though this is not cited here. She also was steeped in a world where the needs of men come first: “my mother was very much a creature of her time . . . the division of labour between them wasn’t merely conventional, it was rigid” and she only became the “hero of her own life” after Hustvedt’s father died. The essay conveys vividly the author’s love for her mother and the particularities of her walk, laugh, and modes of thought. But as in many of her longer essays her thinking seems to be still evolving as she writes, which can lead her into contradictory generalizations often based on very different and undigested sources.

The examination of the life and work of the artist, Louise Bourgeois, who became famous in her seventies, provides further nourishment of one of the author’s favorite themes, namely, how a woman’s being able to produce a child from her body shapes her own life and provokes male envy and hatred. Bourgeois used her abusive childhood and extensive psychoanalysis as a springboard for her creativity and rich fantasy life. One of her best-known works, “The Spider,” is an image of her mother as the Greek mythological figure, Medea, who murders her children when her husband leaves her. Bourgeois intended this as a metaphor for her actual family relations, though at the same time insisting that she did not want to be reduced, as are many female artists, to the mere sum of her personal life.

In her 2019 essay “What Does a Man Want,” Hustvedt explores misogyny, which both puzzles and grieves her. Despite extensive research on the subject, she does not understand “why I am the object of hatred. I do think of myself as a woman and hatred hurts.” She reviews the many attempts by men across the ages to diminish women’s role in the reproductive process by glorification of penis and sperm, as well as by maintenance of the conventional hierarchical split between Mind/Body, which keeps men in the driving seat.

While Hustvedt notes that newish thinking on epigenetics has undermined the Nature/Nurture split, though it is not very widely known, she does not mention the many other scientific advances that have the capacity to change the meaning of maternity and parenting—such as IVF, for example—and in fact herself seems very much invested in the binary dynamic of men vs women with barely a mention of the LGBTQIA spectrum in between.

Part of this may be due to sources she uses, primarily philosophical, psychoanalytical and English literary, and the few gender thinkers mentioned (e.g. Judith Butler) are name-checked rather than explored.

There are many ideas of interest in this collection, though overall it is uneven, in addition to being arranged in non-chronological order that seems especially unhelpful when the author and her life provide so much of the material throughout.  Many essays are overlong but insufficiently considered, and Hustvedt sometimes seems bored with her arguments, often resorting to episodic listing of ideas and sources. Although when dealing with such a famous polymath we have to allow for the possibility that this is a deliberate device designed to catch us napping.