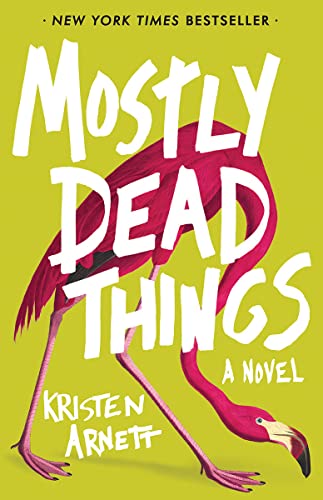 Mostly Dead Things is an odd creature: a book widely recommended and popularly listed, but marked by a fundamental discomfort that defies mainstream appeal. The novel’s Amazon reviews are deeply mixed, varying between readers delighted by the moody oddities and those put off by the emotional darkness underlying the story.

Like so many genuinely strange stories in modern American literature, Mostly Dead Things is set in Florida. Alas, poor Florida. Third-most populous state, afflicted by tales of Florida Man, sinking into the sea, it hangs off the continent with a rueful freakishness. But where Karen Russell’s Florida tales (Swamplandia!, St Lucy’s Home for Girls Raised by Wolves, Vampires in the Lemon Grove) revel in a magically hued terror beneath the sunshine, Kristen Arnett takes a less mythic, but still recognizably southern gothic, look at subtropical America.

Jessa Morton, lesbian taxidermist following in her father’s footsteps struggles with a family dissolving. Her brother has ceased functioning as an adult since his wife (also Jessa’s girlfriend) left him, her niece and nephew are too easily led astray (largely by Jessa), and her mother has taken to assembling kinky dioramas: “she’d rendered a sex scene in the front window of our store. While the panther plowed away at the goat, the wild boar leered at the two of them from behind a large plastic ficus.”

These obscene spectacles draw the attention of sophisticated Lucinda, a gallery owner who delights in outsider art. Arnett’s descriptions of the mother’s art carry the book’s greatest energy. There’s a fury and joy in the work, a determination to desecrate the labor at the heart of dysfunctional family. Three generations have carefully skinned animals, boiled their bones, and resurrected them into modes as lifelike as possible. One woman will break those wired-closed jaws, coat orifices in sequins, and affix the nipple clamps that seem to have emerged from her own, now ended, marital sex life.

Jessa is utterly horrified. Even as she carries on a hate-driven affair with Lucinda, she loathes her mother’s work and Lucinda’s affection for it. That loathing is partially driven by affection for her father, whose suicide didn’t so much shatter her family as set punctuation at the end of its broken sentence. The other part is open horror at her mother’s open sexuality after a lifetime of bland food and southern woman passivity.

The self-loathing behind the sexuality of the novel, though, is inescapable. The book is full of sex, mostly but not entirely between women, and all of it is heartbreakingly self-destructive. Brynn, Jessa’s beloved, her brother’s ex-wife, now gone to find other worlds to conquer, moves through the novel’s flashbacks with a careless aura of heartbreak worthy of the greatest manic pixie dream girls. Brynn’s actions, her sexual drive, her double-sided marriage to two siblings, is enchanting but inscrutable. Even at a distance of years, neither Brynn nor her brother seems to understand why Brynn would do this, or why she ended it.

The frustration Mostly Dead Things creates comes through its lack of answers. It’s not really clear why women do these things. (And it is women who do those things. The men stare with shallow eyes, uncomprehending but uncomplicated.) Jessa is an open emotional wound. We discover the history of how she came to this raw state, but discover little that might heal or transform her, that might offer some real discovery.

If the novel were more fully in touch with its southern gothic heritage, if it took its grotesquery to the next level (and, given the peacocks roaming through, why not imagine the work in the hands of Flannery O’Connor), some epiphany would be at hand. Whether it’s the lack of engagement with faith, or simply the mode of the novel, no such discovery seems possible. Yet if it’s determined to be a tragedy, why not push for catharsis? If it wants to pursue its comedy, why not break those moments fully open?

Mostly Dead Things is almost a great book, but, like its elusive Brynn, it stops short of offering emotional fulfillment, preferring to pose, with naïve cruelty, just out of reach.