The Most Human Right: Why Free Speech Is Everything 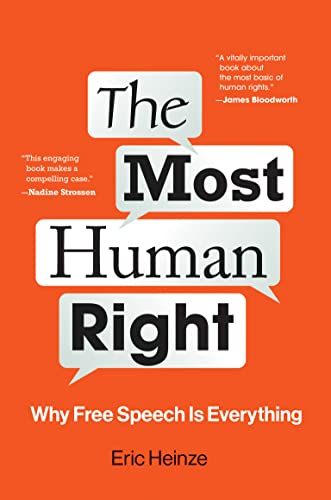 “The Most Human Right can be a valuable book for undergraduate students studying human rights in a philosophical context.”

Professor Eric Heinze of the University of London advocates near-absolute free speech in well-established democracies, such as the United States, Canada, and conceivably Germany, challenging legal bans on hate speech, including the prohibition on questioning the Holocaust.

Following the example of Judge Richard Posner, Heinze ventures into various fields of legal scholarship, including legal philosophy, the concept of injustice, law and literature. (As an all-rounder, the academy will not be surprised if he next adds law and economics to his penmanship.) Heinze is also a dedicated human rights academic, promoting the human dignity of gays, lesbians, and other sexual minorities.

The Most Human Right is a free-speech book with the subtitle “Why Free Speech is Everything.” Heinze boldly claims that free speech is “a necessary prior condition” for international human rights’ “legal” existence. In making this claim, Heinze recognizes the counterclaims in the literature that no one right is the underpinning of all other rights; in particular, free speech cannot override fundamental protections against hunger, disease, torture, and arbitrary deaths. Nonetheless, Heinze impresses the readers that he means well and harbors good intentions in mounting free speech on the throne.

Ranking rights in any hierarchical caste system is inherently counterintuitive and contrary to human experience. History offers a lengthy list of hierarchies, from the right and the left, presumptively constructed for the people’s good, including aristocracy, divine authority, one-party rule, and the dictatorship of the proletariat. Touting free speech as the systemic grundnorm is yet another hierarchy.

Heinze is on a firmer ground against banning free speech, but not so in propagandizing that free speech is everything. Even in America, the home of the First Amendment, pyramiding free speech might smell like privileged insensitivity toward vulnerable groups struggling to stay calm and raise families in pragmatic silence. American feminists have no use for free speech spreading women-degrading pornography. Free speech enthusiasts forget that the First Amendment protects five distinct rights, not just the freedom of speech.

Heinz is aware of the ideological battle waged during the Cold War to proclaim one rights package superior to others. In Chapter Four, he discusses, though perfunctorily, the conflict between capitalist and communist countries over the relative importance of diverse rights, capitalist countries puffing civil and political rights while communist countries blowing economic, social, and cultural rights. The ideological battle continues. However, Heinze registers a pessimistic assessment for other reasons, arguing “that the contemporary international rights systems have failed.”

The US has ratified only five of the eighteen foundational human rights treaties, India and China only eight. The U.S., the largest global economy, has signed but not ratified the Covenant on Economic, Social, and Cultural Rights, containing the right to food, shelter, and healthcare. By contrast, China, the most populated country in the world, has signed but not ratified the Covenant on Civil and Political Rights, containing free speech. Still, Argentina and Bolivia, the nations nowhere mentioned in The Most Human Right, have confirmed all 18 treaties. Heinze might have overlooked these states with the most human rights treaties because they do not champion free speech as the kingpin right.

Heinze cannot rely on the Universal Declaration of Human Rights to suggest that free speech is everything. He confuses aspiration with reality and the armchair analytics with a complex society. However, he correctly points out that some nations sign human rights treaties without any intentions to enforce them. Internationally, it looks good to embrace human rights treaties. It is a new deceptive practice in international law.

Afghanistan has ratified the Convention on the Elimination of All Forms of Discrimination against Women and the Covenants. The dismal state of human rights in Afghanistan emanates from the Soviet and U.S. invasions, terrorism, and a cultural milieu hostile to free speech. Very few nations that have lived and survived from time immemorial, such as Egypt, Iran, and Greece, will buy Heinze’s recipe that free speech is everything. However, no nation can deny that free speech is indispensable in a modern state. Heinze weakens the importance of free speech by overselling it.

Building on the rational individualism of Rene Descartes, Heinze contends that “the quintessential ontology” of human rights is “deeply individualist.” Many treaties confer civil, political, economic, social, and cultural rights on individuals and bind the states with the corresponding duties to protect these rights. However, Heinze goes wrong in imposing Cartesian individualism on “ancient traditions today,” naming Confucianism and Islam. Human rights are universal, mining the deepest deposits of history lessons. It is factually incorrect and an advocacy mistake to strap human rights to any exclusivist ontology or a single Western philosopher.

Borrowing from John Rawls, an American philosopher of Kantian vintage, Heinze introduces the concept of social goods in his analysis and contrasts them to human rights. In A Theory of Justice, Rawls argues that individualism is incompatible with utilitarianism, a philosophy that promotes the general welfare, sometimes sacrificing individualism. The distinction between social goods and human rights reformulates the Rawlsian differentiation between utilitarianism and Kantian individualism.

Heinze does not improve the Rawlsian argument against utilitarianism or offer any new defense for the Kantian notion of individual autonomy. Yet, as discussed below, the distinction between social goods and human rights clarifies a significant but straightforward point in studying international human rights.

Heinze says a dictator may offer human rights as social goods, but these are not human rights because the dictator may take away what he gives. Thus, the people are always at the mercy of the dictator, no matter how compassionate. However, human rights do not emanate from charitable benevolence but an internationally contracted obligation. This distinction is a significant contribution to human rights literature, for which Heinze deserves appreciation.

Since the book integrates Western philosophy with human rights and furnishes extensive footnotes incorporating vast amounts of literature, The Most Human Right can be a valuable book for undergraduate students studying human rights in a philosophical context. The fact that the book’s analysis is controversial and the free speech absolutism provokes extensive opposition is a positive point that can generate spirited discussion in a seminar setting.