A Most Devilish Rogue 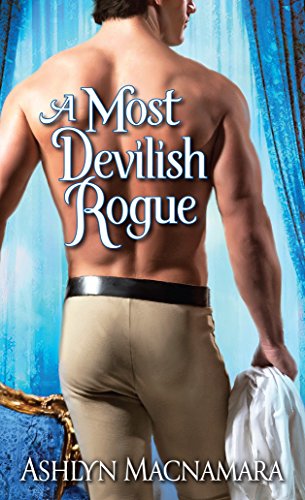 “ . . . a sensual romance, filled with witty dialogue and enjoyable characters.”

George Upperton is a typical Regency gentleman with that period’s typical problems and faults. He owes too many markers, his mistress has informed him she’s pregnant, and his mother’s hauling him off to a weeklong houseparty intending to find him a bride.

George goes mainly to escape the former, figuring he can handle the latter.

He has a third reason in mind. A friend has killed himself after being hounded by the Earl of Redditch to pay his debts. George may have his own creditors, but he can’t let something like that happen to his friends. He asks Lord Benedict to loan him enough money to pay their deceased friend’s debt, and then,

“I mean to ruin every last one of them, beginning with the Earl of Redditch.”

His plans for revenge are set aside however, when he saves Isabelle Marshall’s son Jack from drowning. He’s surprised at her negative reaction. What George can’t know is that Isabelle has come down in the world because of a man much like he.

“The cut of his clothes, their quality, the fine leather of his boots told her all she needed to know. He was a young buck from Tow . . . and she knew from bitter experience that made him dangerous . . . gifted with a quick and clever tongue. She’d succumbed to a silver-tongue charmer once before and paid the price.”

Attracted by Isabelle as much as by young Jack, George finds himself returning to see the two at their village cottage, not realizing he’s taking the first steps toward courting someone her own family deems at the very bottom of the social ladder.

However attracted she may be to George, Isabelle has her secrets and she doesn’t share. She refuses to tell George anything about Jack, his missing father, or her background.

“I might have been one of those people in that fancy manor once. They turned their backs on me. All of them, even my own family.”
“I haven’t turned my back on you. I’m willing to help.”
“It’s not the same. You’re only here until you realize you can’t get anything from me. Then you’ll be gone like the rest of them.”

Just as George gets Isabelle to drop her defenses the least bit, things take another turn. Jack is kidnapped. In the following search for the missing child, George learns Isabelle’s father is the Earl of Redditch, the man he’s sworn revenge against, a man who turned out his own daughter rather than let the scandal of her seduction touch his family. With that discovery, George also learns something about himself, as he admits he’s fallen in love with Isabelle.

“Had he ever sat with a woman in simple silence and given no more than simple comfort? . . . He couldn’t recall a single instance, any more than he could recall being satisfied with nothing more beyond her presence . . . This had nothing to do with arousal and everything to do with companionship . . . He could spend a great deal of time seated thus, basking in her presence, while Redditch and all . . . faded into the background.”

Jack’s rescue as well as the discovery of his father’s identity bring to light an abundance of shocking truths in a startling and unexpected manner.

Though a sequel to A Most Scandalous Proposal, this novel is so fully characterized it can be considered a standalone. It’s a sensual romance, filled with the witty dialogue one expects from a Regency novel, and a plethora of enjoyable characters.

The portrayals of both George and Isabelle paint a picture of two people with secrets their families consider unsavory, pointing out in detail the mores of a culture which urged its men to be wastrels and womanizers, while confining its women to ignorance and the strictest chastity. Most Devilish Rogue is also a story of a man’s evolution from someone who “plays too deep, drinks too much, and enjoys too many ladies outside the bonds of marriage,” into the man he wishes to become. With Isabelle’s faith in him, George throws off the shackles of how his family expects him to be, to reveal the man he really is, a man who “wants her in his life, his future, with whatever entanglements that entails.”

In the end, George turns out not to be the Most Devilish Rogue of the title. That epithet is left to Isabelle’s seducer. George becomes the most honorable and kindest gentleman of all.