The Most Dangerous Man in America: Timothy Leary, Richard Nixon and the Hunt for the Fugitive King of LSD 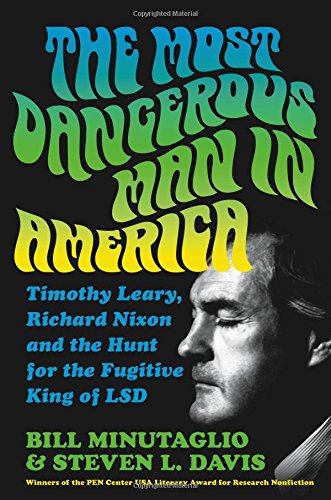 This book is a grand rollercoaster ride through a brief but significant moment of U.S. history, one that America will not likely witness again. The story follows the misadventures of two iconic characters locked in a mismatched battle that defined the early-1970s: Timothy Leary and Richard Nixon. It’s a sad but revealing tale of how “good intentions” leads to what can only be called personal obsession if not madness.

Against the principle narrative involving Leary and Nixon, the authors, Bill Minutaglio and Steven L. Davis, intersperse the tumultuous days of the late ’60s and early ’70s as the social context that binds the two protagonists. This was a period of increasingly mass protest against the war in Vietnam, the call for Black Power, growing violence (notably bombing by the Weathermen and other groups) and the counterculture of drugs, sex and rock and roll.

The drugs of choice were marijuana and LSD (lysergic acid diethylamide) and, to the consternation of Nixon and California governor Ronald Reagan, American youth were getting stoned at unprecedented rates. (Popular music, like the Beatles’ “Sgt. Pepper's Lonely Hearts Club Band,” among innumerable other recordings, popularized the drug culture.)

Leary received a PhD in psychology from Berkeley and in 1959 took a lectureship in Clinical Psychology at Harvard. Around this time, he began research into hallucinogenic drugs, including psilocybin and LSD, believing that these “mind-expanding” drugs offered profound, religious-like insights that could not only promote positive personal behavioral but open up a greater sense of being human. His mantra was “Tune in, turn on, drop out.”

Leary was dismissed from Harvard three years later and relocated his research efforts into psychedelics at an estate in Millbrook, N.Y., where he lived for almost five years. Among Millbrook regulars were Allen Ginsberg, Charles Mingus, and R. D. Laing.

In 1965, Leary, accompanied by his family, was busted at the Mexican border in Laredo, TX, for marijuana possession. Three years later, he was busted again, this time while driving through Laguna Beach, CA, after police found two marijuana roaches in the car. This is where Minutaglio and Davis’ story starts. (For a more thorough consideration of Leary, check out Robert Greenfield’s Timothy Leary: A Biography [Harcourt, 2006].)

The Most Dangerous Man in America covers a tumultuous 28-month period, from May 1970 to January 1973. The book is written in an engaging, easy-to-read style, suggesting a fictional work. It uses a series of short, gossipy snapshots of Leary’s misadventure, Nixon’s overreactions and other developments taking place that give context to the main drama.

The book follows Leary from his Laguna Beach bust and sentencing to the California Men’s Colony/West, a minimum-security prison in San Luis Obispo, and his escape aided by the Weather Underground (including Bernardine Dohrn, Bill Ayers and Mark Rudd) along the very shadowy group, Brotherhood of Eternal Love.

It follows Leary on a madcap run up from rural California north to Seattle where he and his wife, Rosemary (in violation of her probation), get false IDs and take a flight to Algeria. Leary is offered protection by Eldridge Cleaver and the Black Panthers.

Leary’s prison escape sparked a madcap manhunt by Nixon and a host of federal agencies, including the Justice Department, State Department, the FBI and CIA, to capture the man Nixon called “the most dangerous man in America”—a term he also applied to Daniel Ellsberg. Faced with a failing war in Asia and mounting anti-war demonstrations at home, including increased drug us, Nixon and his associates—including John Mitchell, J. Edgar Hoover, G. Gordon Liddy and E. Howard Hunt—single out Leary as public enemy #1 and make his capture a national security priority.

It’s in Algiers that Leary’s rather crazy misadventure goes off the rails. There were never two mismatched collaborators in the great war to overthrow “Amerika” than Leary and Cleaver. Where Leary preached the gospel of LSD and free love, Cleaver insisted on a military-style revolutionary party with him as the paranoid, misogynistic leader. Over time, money woes took its toll and Leary (and his wife) found themselves Cleaver’s virtual prisoners.

One of the revealing aspects in this sad story is the successful efforts by the FBI’s COINTELPRO (i.e., Counter Intelligence Program) to spread discontent among radicals and others. Operating from 1957 to ’71, it targeted the Communist Party, Puerto Rican nationalists, “white hate groups,” the New Left and the Black Panthers.

According to the FBI, “It is believed that upon instituting a counterintelligence program in this field, efforts should be directed with the following aims . . .”: (i) “disruption and discord”; (ii) “creating doubts as to the wisdom of remaining in the independence movement”; and (iii) “causing defections from the independence movement.” It used these tactics against both the Weathermen and the Panthers, fomenting suspicion and bitter acrimony among the leads of both groups.

The last part of the book follows Leary on a doomed effort to find political sanctuary in Switzerland. There he seems to be on a nonstop drug binge, swallowing and smoking anything he and his new lover, the debutante Joanna Harcourt-Smith, can get their hands on.

In a final effort to flee U.S. legal jurisdiction, the couple fly to Afghanistan where CIA agents recapture him. In violation of international law, he is extradited to the U.S. where he is tried and sentenced to hard time at Folsom State Prison.

Parallel to Leary’s plight, while in there he shares a cellblock for dangerous criminal with Charles Manson. During conversations about the virtues of psychedelics, Manson dismissed drugs, “It’s all death,” to which Leary responded, “It’s all love.”