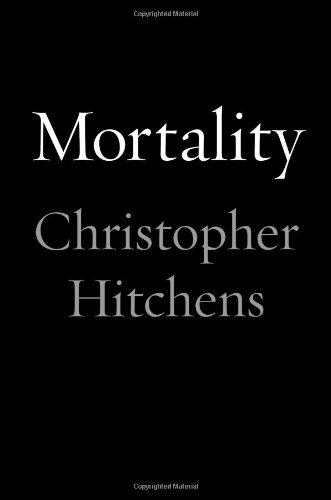 “. . . that rarest of things: a book that moves the heart and mind equally and concurrently. . . . never been another book like it.”

There are few books in this world to which the word splendid can truly be applied. Mortality by Christopher Hitchens is one.

It may seem unlikely, given that this slim memoir is an unflinching, reasoned consideration of death and dying by an author who is himself undergoing the process, but it is the simple truth that a work like Mortality is that rarest of things: a book that moves the heart and mind equally and concurrently. Given the author’s fluency with language, with the fully realized, Ginsu-ed argument, and given not only his willingness but also his firm dedication to fully expose himself at a time of life in which most of us would withdraw to what comforts may remain, Christopher Hitchens with his last work achieves something truly remarkable.

Surely this book will be compared with Joan Didion’s A Year of Magical Thinking and rightly so, as the two authors, essayists both, have gifted us with works of real import. Books that transcend the political, the cultural. Books that reveal to us something about our essential selves.

Didion’s explores what it is to lose the companion of one’s lifetime, the process of widowhood, and survival. Mr. Hitchens’ reveals the steps that one takes, eyes fully open, toward the grave.

Only authors like these are capable of such works. Only those who have dedicated their lives to the uncovering of truth—journalistic truth, political truth, historical truth. With these works, each has dealt with what may be considered “ultimate” truth—time with splendid (there’s that word again) results.

What moves the reader in the case of Mortality is the author himself is not moved. There is never in this series of the most pensive pensées possible, a moment of self-pity or self-doubt. Instead there is this: a mind possessing terrible clarity in the face of the final adversity.

Where others might flinch, Hitchens presses himself forward like the last survivor on the raft, recording his thoughts on what scraps he might find so those who come upon the remains can identify the dead, understand who has been lost.

To this reader’s knowledge, there has never been another book like it. No other words like these, in which the author begins his transition “from the country of the well across the stark frontier that marks off the land of malady,” that which the author calls “Tumortown:”

“The new land is quite welcoming in its way. Everybody smiles encouragingly and there appears to be absolutely no racism. A generally egalitarian spirit prevails, and those who run the place have obviously got where they are on merit and hard work. As against that, the humor is a touch feeble and repetitive, there seems to be almost no talk of sex, and the cuisine is the worst of any destination I have every visited. The country has a language of its own—a lingua franca that manages to be both dull and difficult and that contains names like ondansetron, for anti-nausea medicine—as well as some unsettling gestures that require a bit of getting used to. For example, an official met for the first time may abruptly sink his fingers into your neck.”

“The notorious stage theory of Elizabeth Kübler-Ross, whereby one progresses from denial to rage through bargaining to depression and the eventual bliss of ‘acceptance,’ hasn’t so far had much application to my case. In one way, I suppose, I have been ‘in denial’ for some time, knowingly burning the candle at both ends and finding that it often gives a lovely light. But for precisely that reason, I can’t see myself smiting my brow with shock or hear myself whining about how it’s all so unfair: I have been taunting the Reaper into taking a free scythe in my direction and have now succumbed to something so predictable and banal that it bores even me.”

Interestingly, sadly, having dispatched with Kübler-Ross and her theories of death and dying, Mr. Hitchens then begins to more or less live them as his disease progresses, and as denial fades:

“I am typing this having just had an injection to try to reduce the pain in my arms, hands, and fingers. The chief side effect of this pain is numbness in the extremities, filling me with the not irrational fear that I shall lose the ability to write. Without that ability, I feel sure in advance, my ‘will to live’ would be hugely attenuated. I often grandly way that writing is not just my living and my livelihood but my very life, and it’s true. Almost like the threatened loss of my voice, which is currently being alleviated by some temporary injections into my vocal folds, I feel my personality and identity dissolving as I contemplate dead hands and the loss of the transmission belts that connect me to writing and thinking.”

At the point of diagnosis, as he sets out in his battle against cancer, Mr. Hitchens writes, summing up this struggle:

“Myself, I love the imagery of struggle. I sometimes wish I were suffering in a good cause, or risking my life for the good of others, instead of just being a gravely endangered patient. Allow me to inform you, though, that when you sit in a room with a set of other finalists, and kindly people bring a huge transparent bag of poison and plug it into your arm, and you either read or don’t read a book while the venom sack gradually empties itself into your system, the image of the ardent soldier or revolutionary in the very last one that will occur to you. You feel swamped with passivity and impotence: dissolving in powerlessness like a sugar lump in water.”

Later in the book’s final section comprised of notes and “fragmentary jottings left unfinished at the time of the author’s death,” his conclusion is far simpler, far more direct:

“I am not fighting cancer—it’s fighting me.”

This final section, with quick thoughts on “the banality of cancer,” on paperwork and on cold feet, is perhaps the book’s most powerful, with each entry the distilled essence of disabling experience.

Mortality ends like an unfinished thought with a simple quote from the novel Einstein’s Dreams, written by Alan Lightman:

“With infinite life comes an infinite list of relatives. Grandparents never die, nor do great-grandmothers, great aunts . . . and so on, back through the generations, all alive and offering advice. Sons never escape from the shadows of their mothers. No one ever comes into his own . . . such is the cost of immortality. No person is whole. No person is free.”

Why this quote singled out? An insight? A curse?

We will never know.

Christopher Hitchens was diagnosed with esophageal cancer in June 2010. He died of the disease in December 2011. Mortality is largely culled from the essays on the subject of his illness and his battle against cancer that he wrote for Vanity Fair magazine.

Individually each of these monthly missives was a powerful thing. But they gain even greater traction by being assembled into a whole into this single, passionate, amazing volume exploring what Mr. Hitchens himself called “this year of living dyingly.”