Morbid Curiosities: Collections of the Uncommon and the Bizarre 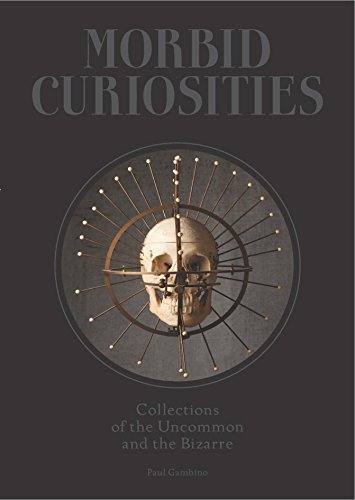 “Morbid Curiosities is highly recommended for its lurid yet tasteful exploration of an otherwise ignored subculture of collecting.”

Decorated skulls, pickled punks, letters from serial killers, and vintage Ouija boards. Morbid Curiosities: Collections of the Uncommon and Bizarre by Paul Gambino focuses on the outré, weird, and unsettling. Gambino profiles 17 collectors and what makes each of their collections unique. The theme tying these disparate assemblages together is the collector’s fascination with death.

In the case of Nicole Angemi it may stem from a professional background. Angemi is a bespectacled young woman with arms sleeved in tattoos who works as a pathologist’s assistant. “At the hospital, I began collecting interesting specimens from an autopsy or surgical case I would be working on.” She goes on to say, “I started my personal collection with old specimens from the morgue that were being disposed of.” Following the births of her daughters she also had her placenta preserved. It might sound grotesque or icky, but these pieces have a very specific and personal meaning for Nicole.

After a short interview with the collector, profiling his or her background, Gambino offers several pages of lavish illustrations. They can reflect the collector’s desire to create his or her own Wunderkammer, or curiosity cabinet, a tradition dating back to the 16th century in Europe. He asks each collector about their most prized piece, a piece that got away, and their “Holy Grail.”

Each collector curates a personal collection that negotiates with death in an individualized way. Due to the sensational subject matter, the general public may come to see these collections through a misinformed lens. Offense might be taken, although not without cause. One collector might even be offended by a fellow collector’s pieces. Every collector establishes permissible boundaries on aesthetic, financial, and ethical grounds.

Just because a collector amasses skulls, skeletons, and implements of death doesn’t make them a Satanist. Most collectors within these pages are either staid upstanding types or well respected within their field of expertise. Many have museum quality personal collections.

Because Morbid Curiosities focuses on individual collectors who seek out human remains, anthropological curiosities, and serial killer ephemera, it should be noted that these are private collections. When dealing with human remains and anthropological artifacts in a public museum setting, that organization must (and should) contend with a series of bureaucratic controls. These include legislation like NAGPRA and Interpol’s guidelines for repatriating art seized by the Nazis.

The motivations for collecting morbid curiosities can stem from personal experience. Mik Miller is the grandson of a diplomat and currently works as a tattoo artist. Traveling to exotic locations in the sixties and seventies fueled his curiosity to collect anthropological artifacts. Among his prized pieces is the “Bunch of Coconuts,” an assemblage of six skulls from a Dayak village in Borneo. He also has the skull from someone who had gigantism and a preserved Peruvian mummy skull.

Morbid Curiosities is highly recommended for its lurid yet tasteful exploration of an otherwise ignored subculture of collecting. Each collector negotiates with the inevitability of death in his or her own way. The individualized portrait of the collector offers a glimpse into each collection. The subject matter may appear strange and gross, but every collector amasses a collection with an alchemical admixture of enthusiasm and reverence. Between the book’s black covers lies an alien landscape, strange and beautiful and morbid.