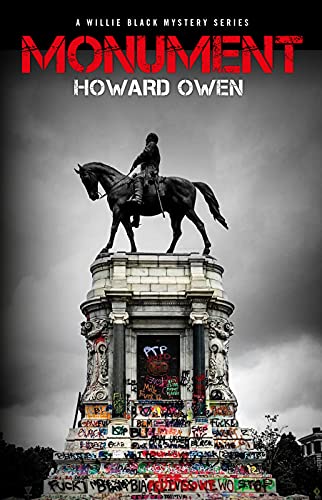 “Owen is a master storyteller and creator of consistent plotting and pacing, seamlessly navigated with characters that are real flesh and blood, and sometimes deeply flawed.”

Richmond is shut down and masked-up amid the COVID pandemic. Then Black Lives Matter outrage evolves into an attack on the Confederate monuments that have long been despised by much of the city population. What else could happen? Willie Black, legendary night police reporter for the local newspaper, knows there’s always something about to occur.

On the first night of what will turn out to be a season of reckoning in the former capital of the Confederacy, cops investigating an unlocked door on a riot-ravaged stretch of Broad Street find something they didn’t expect: a husband and wife who own a second-hand bookstore, Remainders of the Day, have been brutally murdered.

“The man and woman were both bound and gagged, tied to two chairs in the living room. They had both been shot in the chest, once in the head. There was no sign of a struggle.

“‘They were just sitting there, like they were watching TV or something,’ L.D. says. “There were beer bottles and chips on the table.”

“It was more information than the chief usually gives. I could see that, even with the hell breaking loose around Broad Street, this got to him.’

It doesn’t take long for the police to find an obvious prime suspect: a mildly autistic college student who had been befriended by the couple and who was caught by a video camera coming out of the bookstore not long after the murders occurred.

Willie has more than the usual interest in the case, since the suspect is the son of the first of three ex-wives, who made a new life with a new husband after Willie split.

“‘As I’m packing up the tailgating chairs, I get a call. I don’t recognize the number, but it’s local.

“My first wife doesn’t call me very often. She’s moved on and, I hope, forgiven me for the grief I caused her and after I let Little Willie lead me astray, leaving her to raise Andi by herself.

“Adam would be Jeanette and Glen Walker’s youngest. I do the math and figure he’s nineteen now.

“I ask her to explain.

“‘It was him,’ Jeannette says. ‘He looked right at the camera. I even recognized the shirt I bought him for Christmas.’”

As Willie digs deeper than Chief L.D. Jones and his police force would like, he soon has reason to doubt that the real killer is behind bars. Never one to shy away from controversy or seeking justice against all odds, Willie strongly believes Adam is innocent, and he intends to prove it. However, the police have their hands full putting out literal and figurative fires and have little interest in pursuing a case they believe is already solved. Willie, though, has time on his hands (albeit his own, unpaid time as print journalism continues to circle the drain). Before he's through, he'll discover a story of a tragic mistake and the vengeance it spawned, vengeance that spills over into a city that’s already maxed out on trouble.

Bestselling author Howard Owen is back with his 21st novel, Monument, (the 11th in the Willie Black Mystery series) and it’s timely, authentic but more importantly relevant to today’s upheaval world-wide, being told through the eyes, ears and mouth of legendary reporter Willie Black. Black is a terrific creation, filled with sarcasm and dark humor, but also humanity and understanding.

Owen is a master storyteller and creator of consistent plotting and pacing, seamlessly navigated with characters that are real flesh and blood, and sometimes deeply flawed. Monument is testament to that. Gripping, with absorbing drama, twist-and-turns, right down to the final page, Monument is a triumph for Black and Owen.