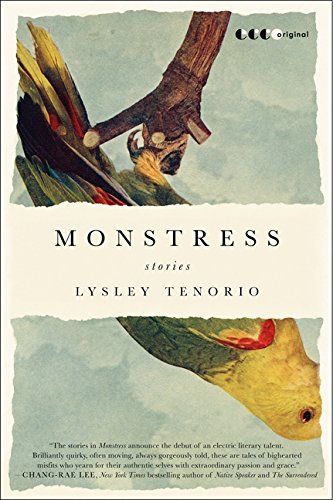 “. . . that the author takes this niche subject and makes from it a tale with universal appeal is proof that Lysley Tenorio is a major new literary talent. . . . While there is room for growth for future tales and future volumes, Monstress packs enough literary heat to excite even the most winter ravaged among us. It is highly recommended.”

There is always a certain joy in reading debut works of fiction—most especially in reading first collections of short stories by new authors who possess not only a talent for storytelling, but also a unique narrative voice, a way of framing the action and writing sentences that is remarkably their own. All the better if the author also shows an imagination that allows the reader to experience new realities and unexpected points of view.

So it is with author Lysley Tenorio and his all-too-brief collection of short stories, Monstress.

Reading these stories is not unlike watching the new season of “American Idol” and seeing a 16-year-old who walks onstage, opens her mouth, and seizes and holds the spotlight with the power of a fully realized, skillfully performed song. For most of us, that voice—spoken, written, or sung—never quite happens. But for some few, the talent seems innate, and their debuts can leave us breathless.

To come at it another way, in perhaps the most imaginative and deftly written of the short stories collected in this volume, “Felix Starro,” author Lysley Tenorio writes:

“I heard giggling. I turned and saw Papa Felix sitting on the edge of his bed, entertaining the boy with a vanishing coin trick. He’d done the same with me when I was that age, making random objects disappear and reappear in his hands—a spool of thread, a mango pit, even a newborn chick.”

Just like Papa Felix, it seems to be Mr. Tenorio’s task to perform magic tricks, slights of hand, and to leave his reader both gasping and guessing, trying to unravel just how so many acts of verbal prestidigitation were managed.

Note that, in the case of this particular story, the reference to prestidigitation is quite apt. For this is the tale of Felix Starro and his grandson, Felix Starro, both of whom are on a business trip from their native Philippines to the United States:

“We had arrived in San Francisco three weeks before. We worked seven days a week, up to ten hours each day, making the kind of money we could no longer make back home. Once, life was different: years before, Papa Felix had been one of the Philippine’s top healers. He’d made his reputation by curing Batangas City Mayor Agbayani’s gout and action star B. J. San Remo’s diabetes, which led him to becoming a regular Very Special Guest Star on It’s Real!! (Di Ba?), the paranormal TV variety hour that named the procedure the Holy Blessed Extractions of Negativities . . .

“After some years, Mayor Agbayani’s gout returned, followed by prostate cancer, and B.J. San Remo became a double amputee. The big-shot clients were gone, and our loyal following in nearby shantytowns brought in little money; I remembered long months when we were paid with eggs and sacks of rice.”
While there are few if any other stories written on the subject of psychic surgery and faith healing as practiced in the back waters of the Philippines, the fact that Lysley Tenorio is able to choose this as his topic and to shape it into a tale that is realistic and human enough that the reader soon accepts the family business and the practitioners of it to be part of the human norm shows his authorial skill. And that the author takes this niche subject and makes from it a tale with universal appeal is proof that Lysley Tenorio is a major new literary talent.

“Felix Starro” proves to be not only the finest story in this collection, but perhaps the finest that this reader has come upon in any collection over the past few months.

The fact that Mr. Tenorio can actually take his reader into the room in which the psychic surgery is being performed and give not only a more-or-less factual understanding of the phenomenon and its implications, but also put the emotional and spiritual cost of the experience, both for the practitioner and the patient, on the printed page displays the depths of the author’s talent.

That Mr. Tenorio is himself a native of the Philippines who now lives in San Francisco only lends a special credence to his story. Indeed, the majority of his tales involve this same San Francisco-via-Manila geography, as characters, short term or long, come to grips with life in the Golden State.

While none of the other stories gathered here have the imaginative vision or the perfectly wrought denouement to match “Felix Starro”—to tell any more would be to tell too much—let it be noted that, like Felix and like the title story, each of the stories here share what might be called a “commonality of monstrosity,” as each contains, at the heart of the tale, a character who secretly, visibly or culturally monstrous.

Thus it may be said that in applying his full and lustrous imagination to the idea of being the alien, the “stranger in a strange land,” Mr. Tenorio creates worlds apart—layers of reality in which the monsters are so close we can feel their breath on the back of our necks:

There are the monsters who inhabit Culion, an island leper colony, on which two people, bonded by a common language and a common ailment, find an enchantment of sorts in a old shack with a curtained partition.

There is the monster-to-be in the story “Superassassin,” a comic book addicted child who, along with his beloved comic character Hal “Green Lantern” Jordan, is transforming from superhero into super villain.

There is the Monstress of the title story, an actress (once referred to as the “Filipina Sophia Loren”) consigned to playing a bat-winged pygmy queen, a werewolf girl, the two-headed bride of two-headed Dracula and the Squid Mother, who jumps at the chance to fly to Hollywood to make a low-budget horror movie.

Or in “The Brothers,” there is the brother who, with all his heart, wants to be a girl. Here the monster is seen through the eyes of the mother, whose ties to her old life in the Philippines blocks her from being able to love and accept her transsexual daughter.

These are the collection’s most successful stories, each fully realized and powerfully rendered. But not all the stories collected here are of equal skill. Particularly weak is the final story, “L’Amour,” in which Mr. Tenorio attempts to tell his tale through the eyes of a nine-year-old with unconvincing results.

This same tendency toward pathos undermines “Save the i-Hotel” as well, as the reader, within a handful of pages, begins to wish that the i-Hotel would close already. Interestingly, these are the stories in which Mr. Tenorio abandons his pop-culture-fired imagination (lepers, superheroes, faith healers) for stories of everyday life, leaving the reader to wonder over the source of the author’s next work of fiction.

While there is room for growth for future tales and future volumes, Monstress packs enough literary heat to excite even the most winter ravaged among us. It is highly recommended.