The Monster Baru Cormorant (The Masquerade) 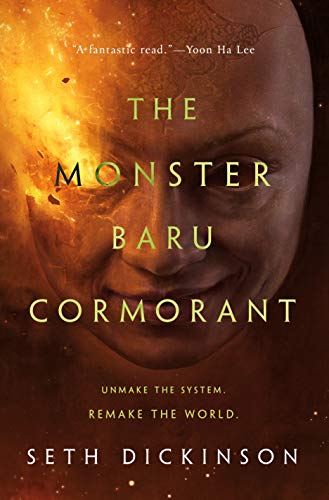 “A hard, mesmerizing book, The Monster Baru Cormorant will have deep appeal with fans of both dark and low fantasy (“hard” fantasy), as well as those looking for the world-as-character detailing found in many of the more popular epic/high fantasy worlds.”

In the second of the Baru Cormorant series Seth Dickinson expands into the greater empire, exposing an ever-growing network of lies, deceit, and the flawed humans who make such decisions.

Among them is Baru Cormorant, now a cryptarch of the empire, and an unforeseen threat. She has refused to save the duchess, her girlfriend Tain Hu, from drowning, so that Baru will have no one to be used against her—no one that ties her emotions down and affects her judgment—so that she can finally destroy the Masquerade and the empire.

Except the decision to let Tain Hu die isn’t Baru’s—who would have sold herself to her captors to keep her loved one alive. But Tain Hu insists this is the correct course of action, and Baru must move forward with one more death on her hands, one more piece of her heart missing, all while aiding the empire in their search for a magical cancer that might grant immortality or, as Baru hopes, the dissolution of the Empire.

The Monster Baru Cormorant offers a deeper, yet still hedonistically seductive look into the Empire of Masks. Multiple POV narrators, jumping from first person to third, present to past, flawlessly detail the web of events that spiral around Baru as she drives herself mercilessly forward to honor Tain Hu’s requests.

Moral ambiguity abounds yet the book keeps enough flavor of the real world’s (grim) past and present to create a rich, yet sometimes painful reading experience. Racism, sexism (running in multiple directions), eugenics programs mirroring the U.S.’s not so distant past, and intense homophobia run throughout the characters, yet the narrator’s voice often denounces these traits as it progresses (or at least calls them into the light for discussion)—and offers no easy solutions:

“He had a good face, big-eyed and curious and beautiful, darker enough than Baru to be brown-black. In ancient days golden monkeys with clever faces were companions to the Oriati princes of myth, but Falcrest had stolen that image and racialized it, and Baru would not make the comparison now.”

These elements blend into strong social commentary that may tread into triggering areas for some readers. Discussion of female circumcision as a “cure” for lesbianism, as well as forced rape for conversion, creates a powerful feedback of emotions. In particular, as the book revolves around a lesbian and as such her “defects” are portrayed in the greatest light, readers within this particular sphere of marginalization may find sections of the book physically painful to read.

Despite the overarching “women in refrigerators” trope, used in The Monster Baru Cormorant with a lesbian twist and a splash more agency, the book embraces diversity. (“She chose when and where she would die. She chose the meaning of her death, and she chose the method. Rare is that gift, isn’t it? Rare is the choice to write the end of your own story.”) The countries around The Ashen Sea boast an array of ethnicities, sexualities, and genders. POV characters come in gay, lesbian, and even an undefined third gender called “laman.”

“The House Bosoka asked the child, at age six, for their gender, and the child was a laman. Lamen did not exist everywhere in the world, but many mbo people were lamen, and Tau-indi felt quite sure they must be one.”

“‘I chose my gender. Didn’t you choose to be a man? Or do they say, you have a penis, so you’re a man? What about people with both? What about the people who don’t want sex and all the other sorts? How do you sort them, if you don’t let them choose for themselves?’”

This richness helps balance the grimdark world and its brutal eugenics and conversion therapies. It shows a world struggling with itself and its morality while those most affected make the sacrifices necessary to tear it down.

A hard, mesmerizing book, The Monster Baru Cormorant will have deep appeal with fans of both dark and low fantasy (“hard” fantasy), as well as those looking for the world-as-character detailing found in many of the more popular epic/high fantasy worlds. Some elements may be triggering, especially for those in LGBTQIA+ communities or those affected by (or with family members affected by) eugenics, and as such, readers may want to prepare themselves for the way in which Dickinson frames the conversation of human rights.