The Money Plot: A History of Currency's Power to Enchant, Control, and Manipulate 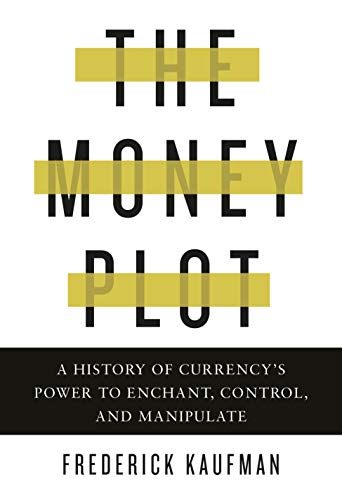 “Professor Kaufman’s approach is insightful and original. And perhaps a bit more rigor in formalizing his approach will take us even further.”

Though money is central to our lives, we rarely think about it very carefully. Like the language that is our culture, we use money and understand its meaning without being fully conscious of that meaning or the ways that it is used.

Money is part of the social exchange in which most humans engage. It is a denominator of exchange, a means of exchange, and a store of value. And above all, it is an idea that we use to communicate with others. To trade a quantity of apples that we think is equivalent in value to a quantity of oranges, we name a price in terms of money and often use that money as an intermediary.

Money in western society developed as a base metal that everyone valued. It became more refined and standardized as coinage. And comparatively recently in human history, we began to use paper documents as representations of base metal. Then we used paper as an idea, completely detached from the ability to exchange currency for metal. And then electronic claims on paper became our primary means of exchange. Increasingly, the electronic claims are divorced from any underlying paper currency.

To make matters more complicated, money is often intertwined with politics. Coinage was often issued by caesars and kings and then sovereign states. It was minted in the Temple of Moneta, and our worship gradually shifted from a Roman goddess to the throne of materialism sanctioned by those who govern us.

As money has become more of an idea, and less of a physical commodity, scholars have begun study the concept as a form of culture and politics. One fascinating approach is taken by English professor Frederick Kaufman. He studies money as storytelling, as an allegory.

Professor Kaufman draws on a rich knowledge of other cultures and non-Western history. He illustrates our own allegories with foreign and ancient myths, and he explores archeological finds with the insights of our own allegories.

He explores humans as money (slaves), and women as trophy wives. He traces the origins of money as a power relation to the first written tablets in Mesopotamia. And most importantly, he uses our understanding of language and storytelling—the trope, the synechdoche, and metonymies—to educate us about his academic field and about the culture of money that we know but really do not understand deeply.

Professor Kaufman’s novel approach is a delight to read. If he at times lacks a very complex facility with modern finance, it detracts little from the points he tries to make. Still, at times a reader might wish for the linearity of social sciences, where causation is in one direction between independent and dependent variables. If money is a story that is a part and parcel of our culture, then one would expect other cultures to tell stories that are substantially different in meaning. Is it the unfamiliar myths that help us to explain the way we tell the story of money? Or is it our storytelling that helps us to understand those foreign myths? The Money Plot blends the two directions of causation almost seamlessly.

The past 40 years have witnessed a western imposition of our ideas about market exchange on the rest of the world. Globalization represents the acceptance of our story of money as a result of power and domination. And understanding the extent to which stories are imposed, not indigenous, should be an important facet of recognizing the meaning of globalization. Professor Kaufman’s approach is insightful and original. And perhaps a bit more rigor in formalizing his approach will take us even further.