The Mom & Pop Store: True Stories from the Heart of America 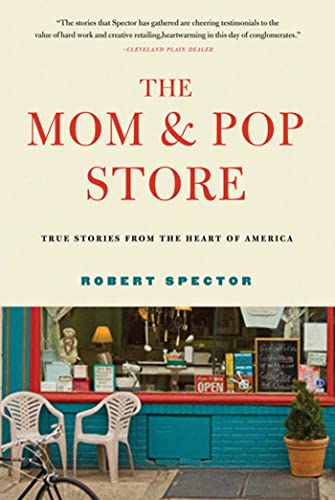 With multinational corporations firmly ensconced as the evil raptors of our economy, small businesses have now become the red, white, and blue of a new commercial patriotism. Indeed, for Robert Spector, author of The Mom and Pop Store (just published in a new paperback edition), they are the hallowed ground of American capitalism.

The nostalgia, the sentimentality for these little firms as the footholds for new immigrants, rising entrepreneurs, and business-minded families is understandable. Indeed, Spector delivers panoply of cameo lockets—sentimental, unconnected little anecdotes about a series of firms. It’s a Studs Terkel walk down Main Street.

But nostalgia can turn to fetish. And size does not necessarily bring merit to a commercial transaction. In fact, the small bodega often prospers because of its captive customer base: the poor, disabled or time-pressed buyer doesn’t have the means to test price points outside the neighborhood. The bakery down the block may be charging $24 for the same apple pie that Costco offers for just $9 a mile away (as this reviewer found out last Christmas in Manhattan).

Spector has written about small retailers’ supposed predators, the big box stores, in his previous book Category Killers. Though Spector treated them even-handedly, to many people Walmart, Home Depot, and Staples are the villains of the American marketplace; butcher shops, dry goods purveyors, and little book shops are the heroes—and Spector pushes this meme.

Why? Spector, like many urban intellectuals, yearns for a Jane Jacobs model: Greenwich Village in the 1950s. It’s the Disney vision of a retail Valhalla, the mechanical cash register ringing up Mr. Smith’s Saturday morning purchases, all filmed through a gauzy lens.

But a one-dimensional, romantic view of the marketplace is the last thing we need. Smart businesspeople have learned how to co-exist and even run circles around Walmart, adapting and outhustling the Bentonville Behemoth. The ones who have stayed stuck with a 30-year-old business model haven’t. That’s the real truth of the American economy—the winnowing of those businesses that customers won’t support, the triumph of those firms that lure buyers back again and again.

But it is Spector’s childhood experience in his father’s butcher shop that informs his worldview. That takes up the first 60 pages; then, we are treated to a little history of marketplaces, but not enough to support any particular point. Then it’s off across the country for a page or two about several dozen establishments. No discernable narrative, nor any motive for the prose slide show.

It’s a pity because Spector at least realizes that owner-operators must be tough-minded, optimistic, and opportunistic. But The Mom and Pop Store only scratches the surface. What about the thinking, character, and acumen of the people who run these firms? Some, I believe, could just as easily run a Fortune 1000 company as sell pork chops.

Help us, please. In this Great Recession, we must know more about how to ride the tides of capitalism.