Mixed Periods and Other Grammar Scares: How to Avoid Unplanned and Unwanted Grammar Errors 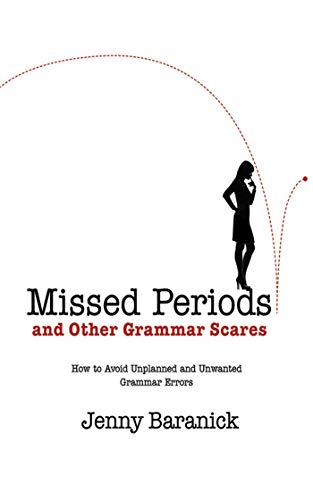 “Ms. Baranick contrives one cringe-worthy analogy after another.”

It’s a subject that has been, up to now, only sexy—if that could ever be the right word—for a relatively few word nerds (like this reviewer!). In fact, I’m not convinced author Jenny Baranick is seduced by it at all, despite her attempts to prove otherwise. And perhaps that’s why her efforts just don’t work.

As far as this book goes, Ms. Baranick’s a self-confessed imposter—and it shows.

“My students think I love grammar,” she says. “That just says one thing to me: I chose the wrong profession—I should have been an actress. I don’t love grammar. Loving grammar is like loving oatmeal. It’s no three-cheese omelette, but it’s good for us.”

A teacher of English composition, critical thinking, and a remedial English class called Writing Skills at the Fashion Institute of Design and Merchandising, the author says she is consistently shocked at the poor grammar of her students, which is apparently why, in January 2010, she started her popular Missed Periods and Other Grammar Scares blog.

As she points out: “. . . our writing is our first impression. People read our resumes, cover letters, proposals, and emails, and that’s the basis on which we are judged first. If our writing is full of grammar and punctuation errors, even though the content may be great, it’s like wearing a beautifully made Prada dress that has deodorant stains.”

Mixed Periods and Other Grammar Scares covers the grammar basics and not much else, and that’s okay as it makes no claim to do more. Where it falls apart is in the author’s dogged adherence to her shaky theme.

First up for the treatment are confusing words, and Ms. Baranick lists what she calls “The Dirty Dozen.” The first of these are the words lose and loose.

But females must cheer up, she entreats: “The gender cheating gap is closing. Women are reportedly cheating almost as much as men. Isn’t that great news? I love equality.”

Not only that, she explains at length, it all helps to clarify why people mix up the two words and, more particularly, the overuse of loose.

“Now it makes sense. Because everyone is so sexually loose, they are subconsciously expressing it when they write.”

I don’t think so.

Apostrophes, em dashes, ellipses, and all the other basic grammatical stumbling blocks get the same tacky treatment as Ms. Baranick contrives one cringe-worthy analogy after another.

“If I could change one thing about myself, what would it be,” she asks at one point, and then chastises herself for wanting green eyes, longer eyelashes, a flawless complexion . . .

“Wait a minute! I should be ashamed of myself. All of these changes are so superficial. If I could change something on the inside, I would remove the part of my brain that can’t help but associate Richard Gere with gerbils.

“For those of you who don’t know what I’m talking about, several years ago there was a rumor. . . . You know what? Never mind. I am not going to tarnish your Richard Gere experience. . . . He deserves more than being known as the gerbil guy.”

And then (lest you didn’t get it after all that): “When I think about Richard Gere, I can’t help but simultaneously think about the colon.”

Come on! Does Ms. Baranick seriously expect us to believe that this is an embedded, constant thought that she would have excised if she could, rather than a pathetically weak excuse to link the punctuation mark to its anatomical namesake and give readers something to snigger about?

The book’s marketing material describes it as edgy and entertaining . . . in the spirit of the bestselling Eats, Shoots & Leaves, and adds that grammar has finally let its hair down, giving us laugh-out-loud, “dare we say, a little risqué” advice:

“By spreading her remarkably user-friendly and hilarious approach to grammar, she hopes everyone will experience the satisfaction of a properly placed comma, a precisely used semicolon, and a correctly deployed en dash.”

A worthy aim, but Ms. Baranick would have been better off using a softer approach: a feather to tickle our funny bones instead of a sledgehammer to batter her message home.