The Mistress of Nothing: A Novel 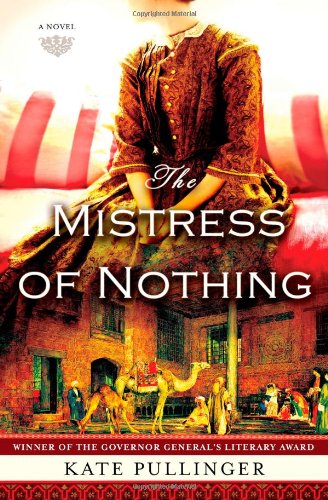 Oh, to be a 19th century English aristocrat compelled to take a languorous journey by coach—ship—camel to the mysteries of Egypt, where upon a sturdy square-sailed dahabieh, doting servants attend to your every need as the boat meanders up the sun-drenched Nile. This is the shamelessly sensual delight of The Mistress of Nothing, based on the true adventures of Lady Duff Gordon as seen through the eyes of her spirited lady’s-maid.

Kate Pullinger, who’d previously collaborated with Jane Campion on the novelization of the film The Piano, shows her fierce writing skills in this American debut. This novel is a feast of a story that delivers the full Merchant Ivory experience—as well as sharp thematic teeth. Consumption—that oh-so-fatal-disease—is what has propelled the doyenne of London society all the way to dusty Luxor.

But this cough-wracked lady is no fainting Victorian. She’s a gregarious, intelligent, bulwark of a woman who shores up nicely in the dry air, and then is further vitalized by the local luminaries who call upon her. Her lady’s maid makes a perfect traveling companion, as Sally not only adores Lady Duff Gordon, but she is eager to leave the stifling upstairs/downstairs world for a rare chance, for a woman of her class, to journey abroad.

But though The Lady revels in the exotic scenery, people, customs, she’s keenly aware that this is an odd Egyptian after-life, and that she has sacrificed her home and family for her health. Sally, on the other hand, morphs into a new creature under the Egyptian sunshine, succumbing (though she should know better) to a romantic relationship, and then succumbing further (unfortunately) to fuzzy self-delusions that allow her to avoid dwelling too deeply on the multiple and far-reaching social and cultural consequences of her actions.

But Sally’s self-wrapped cocoon of self-delusion can’t last forever. The very singular Lady Duff Gordon—seemingly so liberal in sentiment—is roused to cold fury at the evidence of life, and love, blooming under her very nose. Her heart hardens like that of some ancient female Pharaoh, who fully expects her servants to be mummified by her side.

And herein lays the theme of the novel, a theme that tears at the genteel veneer of these English women’s enviously exotic lives: What terrible power is wielded by those of a certain class, wealth, and status, and how fierce is the damage they can so thoughtlessly inflict upon those put under their charge. In essence: The Nile seems so lovely. But just under the surface lay crocodiles.