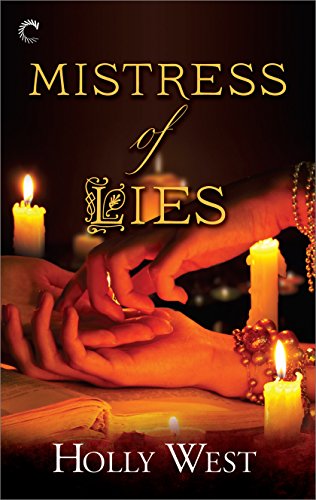 “. . . one woman’s search for the truth of her brother’s death at the risk of her own life.”

Upon her return from Holland where she did a bit of spying for Charles II, Isabel, Lady Wilde, one of His Majesty’s mistresses, finds herself in debtor’s prison, from which friends had to rescue her.

“. . . I found out later that one of Charles’s other mistresses had manipulated him into sending me because of her jealousy.”

Realizing she can’t rely on Charles to protect her, Isabel begins the lucrative but secretive business of portraying a fortune teller, in order to make ends meet.

“. . . During the past six years I’d made a good living disguised as Mistress Ruby, a fortune-teller and healer catering to London’s elite.”

It’s as herself, however, that she’s about to meet her greatest challenge, when a young beggar girl comes to her house demanding entrance.

“. . . she was indeed a pretty young poppet—she appeared to be nothing more than an ordinary beggar, or possibly a prostitute, the sort of girl London devoured in one quick bite.”

The girl is much more, however. She introduces herself by a name Isabel knows well—Susanna Barber—for it’s her own mother’s. The girl further confounds her by stating she’s the child of Isabel’s older brother, Adam Barber. Isabel is shocked and disbelieving.

“. . . What she said was impossible. My brother Adam died of the plague in 1665, unmarried and without children. In fact, he died utterly alone, for I’d spent that year in Amsterdam and my younger brother, Lucian, had left London with the king and his court when the pestilence began its scourge upon the city.”

Susanna has a fantastic story to tell . . . her father survived the plague, nursed by her mother at a plague house. They married and then he was murdered, after which her mother became a transportee to America where Susanna was raised.  At the age of twelve, the girl determined to find her father’s family and with the help of a friend, returned to England. She also gives Isabel a ring which she recognizes as one crafted by her brother.

". . . Adam had been a prolific craftsman, and similar rings no doubt rested within the jewelry boxes of many of London’s richest ladies. It would be no great achievement for some cunning thief to steal one of them and pass it on to Susanna—if that was really her name—to help convince me that she was Adam’s daughter.”

With this dubious proof, Isabel sets out to determine the truth of Susanna’s story and immediately discovers contradictions in the story of Adam’s death as told to her by friends. Those same friends try to discourage her in her quest. Even Isabel’s younger brother offers no assistance.

“ . . . ‘God’s blood, Isabel, do you realize we’re sitting here discussing whether it would be better if he was murdered or died naturally of a hideous illness?’ His words echoed my own thoughts of the day before. ‘The fact is that Adam is dead. I don’t see what good can come of dredging up the past.’”

Nevertheless Isabel persists, using her persona of Mistress Ruby to ferret information from friends and foe alike. Her belief in Susanna’s story is confirmed when the child is abducted.

What follows is an account of the devastation of the plague as it swept the countryside, of those who perished and those who didn’t.

“. . . In September, the plague deaths were at their peak. Twenty thousand in one week.”

Amid it all, Isabel discovers a family scandal which coincides with Adam’s so-called death. She visits Sir Richard Winser, Adam’s mentor.

“. . . My brother’s death had devastated him, and, in a cruel twist of fate, his own daughter, Margaret, who’d been my dearest friend, had died of consumption around the same time.”

Now Isabel discovers Margaret didn’t die, but may have survived become Adam’s wife and Susanna’s mother before being transported to America. If so, she was witness to Adam’s murder, but the question remains: Why was Adam killed and by whom? Why did her family say Margaret died also?

When Isabel finds the answer, she will wish she hadn’t.

Interspersed with historical facts and insights into Charles II’s court, Mistress of Lies is an enlightening first person account of the plague years, of social upheaval, lives lost and the steps taken by those who survived. The mystery of Adam’s death is a convoluted affair in which Isabel’s own life as well as that of her niece may be forfeited if the truth comes to light. Ultimately, this title chronicles one woman’s search, at the risk of her own life, for the truth of her brother’s death.