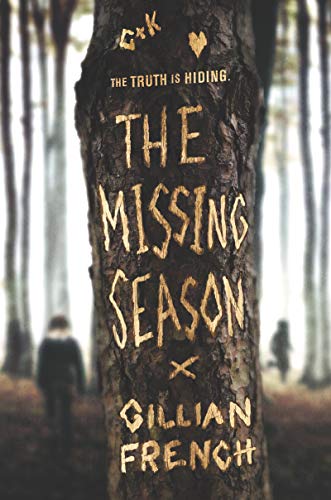 “The Missing Season is a creepy read, thrilling, fast-paced, and spooky. . . . There is much to entertain, and much to send shivers up your spine. . . .”

Clara is used to moving to new places. Because of her dad’s construction jobs, their family transfers often, so often that Clara never feels at home anywhere.

“Packing sucks, but unpacking is the worst. It’s basically life’s way of saying, hey, in case you were hoping for a fresh start, here are your scratchy bath towels and the lamp nobody likes, to remind you how impossible that is. Unless you’ve got a million dollars. And a Milton Bradley Facial Reconstruction Kit for Beginners.”

But something about Pender, Maine, is different. It could be the skateboard community that takes her under its wing, making her feel a part of things. It could be Kincaid, the boarder who does something to Clara’s heartbeat whenever he’s near. Or it could be the creepy legend of the Halloween creature who has supposedly made several teenagers disappear.

“Mumbler, Mumbler, in your bed,

Eat your nose, gobble your toes,

And bury you where the milkweed grows.”

Clara isn’t sure whether the others are pranking her, or if they really do believe there’s someone in the marsh who takes kids. They insist they’re telling the truth, and lead her out into the woods, where Kincaid tells stories of murdered teens and a killer who lives under the bridge. Clara can’t help but be spooked, whether it’s true or not.

“The stink is the first sign that we’ve arrived: a dark, sulfurous blossom that brings our hands to our noses. The trees have thinned out, and I catch glimpses of open area, dusky sky. This must be the marsh.

It’s tidal, this place, the water at low ebb, baring acres of muddy flats fringed by more pitched pines and mountain holly, wooded hills in silhouette against the sky. Footpaths wind down the weedy, crumbling embankment all the way to the flats, though I can’t imagine walking down there or why anyone would want to try.”

Clara tries to ignore the fear and danger of the town, but then one of the skater girls disappears. Is it the Mumbler? Or is there a serial killer hiding in the town of Pender? Clara doesn’t know, and isn’t sure how to keep herself or her friends safe from whichever kind of monster it is.

The Missing Season is a creepy read, thrilling, fast-paced, and spooky. Clara is a likeable and sympathetic character, as are her friends. Anyone who enjoys horror movies, true crime, or Halloween will enjoy this book. There is much to entertain, and much to send shivers up your spine. . . .