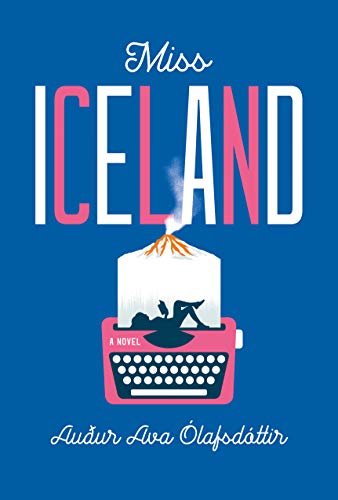 “Miss Iceland is a beautiful novel about artistic aspiration and friendship. The storytelling sparkles . . .”

In 1963, when our 21-year-old narrator, Hekla, steps on a bus to Reykjavík, dreaming of literary success, there are only 175,000 readers of Icelandic. But her culture is steeped in a rich tradition from the 13th century sagas to the novels of 1955 Nobel laureate, Halldór Laxness—glimpsed, maybe, driving by in his Buick.  Perhaps this country also provides the challenges that help produce great literature. In addition to the subarctic weather and a struggling economy, there’s pervading sexism and homophobia that Hekla and her friends must overcome.

Miss Iceland is a simple story richly told. And although this reviewer cannot asses the accuracy of the translation, the resulting English is both conversationally grounded and lyrically enchanting. Born to farm family in Dalir, Hekla, named after a volcano, is brought by her father at the age of four to see its eruption. After that, her mother says, “You spoke in volcanic language and used words like sublime, magnificent and ginormous. You had discovered the world above and looked up at the sky.”

Looking for a writer’s life in the big city, Hekla rides the beat-up coach, reads Joyce’s Ulysses, and gazes out over the countryside: “Didn’t a female writer live on that farm? Didn’t the strong current of this coal-grey river full of sand and mud ripple through her veins?” Hekla remembers that the woman—“the only model of a female author I had”—drowned herself. Later she will read Sylvia Plath who took her own life in 1963. Any path for a woman beyond being a wife and mother is especially hard and dangerous.

Hekla’s close friend, Ísey (named after an iceberg), married young to an unimaginative road worker, has one child and one on the way, and seems to waver between enjoying and hating her life. Ísey unequivocally loves art and literature, however, and she starts writing in her diary, though her husband interrogates: “‘Is Hekla influencing you? . . . Why don’t you just leave that nonsense to her?’” She gives up writing and learns to drive a car.

Ólafsdóttir offers a layered critique of femininity, from the absurd notion that all great writers should be men to the abuse of mother nature: draining wetlands where birds nest, slaughtering cow whales, even neglecting a little female cat (that Hekla rescues).

As a single woman, Hekla is constantly sexualized by men, beginning with a crude business mogul representing the Reykjavík Beauty Society who insists she enter the Miss Iceland Contest. She declines. And when Hekla looks for jobs, she is valued most for her looks. Sexual harassment is commonplace at the Hotel Borg where she waitresses. “If you complain,” a veteran server says, “they’ll say: that’s the way it’s always been, get used to it.” Even her lover, “the poet,” who shares his meager flat with Hekla, becomes unglued when he learns that she is the real writer, productive and engaged, while he remains a coffee shop poser. Hekla’s greatest male allies are her father and her friend, Jón John, a semi-closeted gay man.

The scenes with Hekla and Jón John are masterfully rendered, showing us true male-female intimacy that is not sexually charged. Jón John is also the victim of gender restrictions. Despite his love and talent for fashion, as a man he’s forced to take brutal jobs aboard commercial fishing boats where he’s harassed by the crew.

Like Ísey, Jón John is very supportive of Hekla’s writing, and he convinces her life might be better in Denmark or in southern Europe. They travel, but find challenges everywhere. Jón John is especially discouraged: “The liberation of queers is about as likely as men walking on the moon. . . .” Woke Icelanders knew the world was changing—the activism of Martin Luther King, the Beatles, rising hemlines, and new technologies like Hekla’s electric typewriter bode better times ahead.

Miss Iceland is a beautiful novel about artistic aspiration and friendship. The storytelling sparkles, and the rhythmic breaks with their quirky subtitles make this modern mini-epic run smoothly until its surprising and disturbing conclusion.