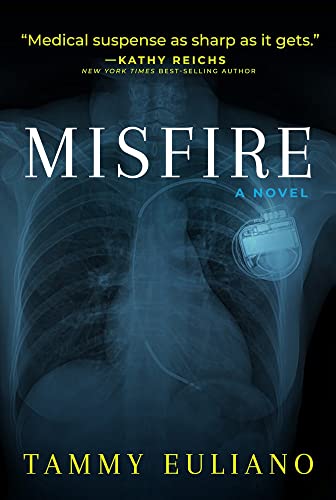 “Misfire is a good story that makes turning pages quite easy.”

Euliano clearly knows her medical terminology and activity, as she is a practicing anesthesiologist.

Misfire opens in the operating room where a patient is asking Dr. Downey not to let him die. The patient explains that a medical device—an “automated internal cardioverter defibrillator, or AICD [that was] implanted in his chest to detect and treat the problem should it recur” has misfired twice.

This is a disturbing piece of information for Dr. Downey since her Aunt Irm is also the recipient of this device. Kate discusses this situation with her friend, Dr. Nikki Yarborough, cardiologist, and Aunt Irm’s doctor.

Kate is soon alerted to the fact that the patient’s misfire experience is not the first to occur with the AICD, and panic sets in when Aunt Irm’s device misfires.

A widow, Kate can not face losing another loved one, and she takes steps to inactivate her aunt’s device. At the same time, she learns that her friend, lawyer Christian O’Donnell, is preparing a sale of the device to a wealthy purchaser.

The quandary that arises is twofold—have the other 50+ users of this device been alerted to the misfires, and has the buyer been told?

Euliano brings in several more characters to fill in the mystery. Drs. Cantwell and Samuels—developers of the device care more about the sale price than patient safety. Nathan Castle is a young engineer who worked assisting in the original development of the device. And Ian Yarborough is the estranged husband of cardiologist Nikki.

It doesn’t take long before more misfires occur, and Kate learns that the other patients have not been alerted to take precautions.

The story begins to ramp up as Kate learns that the misfires are not an accident, but have been intentionally brought on by a mysterious blackmailer who insists the sale of the device be stopped, with an additional demand of two million dollars.

When Nikki finally contacts Kate, she tells Kate that she and Ian have been threatened and are in hiding. She tells Kate where she is, and they reunite. When Kate returns home she tries to contact Nikki but hears only silence. No response to phone calls or emails or texts.

Detective Garner, a friend of Kate and Christian’s, enters the scene. As hard as he tries, he is unable to convince Kate to stop her investigation and leave that work up to him. Although she continues, she also shares what she learns with the detective.

As her concern rises for her missing friend, Kate soon learns that Ian has been murdered, and Nikki has been kidnapped by one of the original engineers on the AICD project, Dale Bennett.

It should be noted that this event occurs about three-quarters of the way through the book, and is an unusual development that early to learn who the bad guy is. Until this point, Euliano has done a really good job of keeping the true identity of the truly bad guy, under wraps . . . or has she? The reader continues to wonder—Nathan? Christian? Dr. Cantwell? Dr. Samuels? Or someone else entirely.

Euliano’s characters are well developed individuals who require no lengthy history in order to exist as real people. In particular, Kate’s Aunt Irm is a nosy busybody whose care and loyalty for her niece goes without saying. An elderly German woman, she speaks her mind regardless of whom she is talking to, and thus she is endeared to the reader. Each of the characters has a specific task to perform in order to solve the case of the misfires, the missing persons, and the kidnapping.

If there is a negative about this story, it could be the medical terminology and description of medical procedures. If the reader thrives in a medical environment, the use of these terminologies and descriptions will be an added benefit. For the person who just wants to read a good mystery with a maze of corners to move through, this might be a little more challenging.

Euliano does an admirable job of creating a side story in the relationship that develops between Christian and Kate, while never diminishing the important premise of the AICD misfires.

On the whole, Misfire is a good story that makes turning pages quite easy. A good read for a cold or warm weekend!