Misconduct of the Heart: A Novel 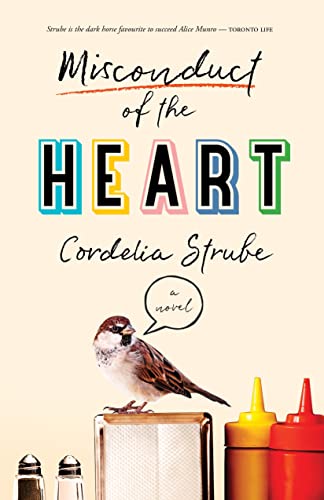 “In Misconduct of the Heart, Cordelia Strube achieves a transcendence in the person of her protagonist that speaks to hope in the worst of times.”

Misconduct of the Heart could perhaps do with a warning label for readers: Proceed at your own risk; objects in the mirror are every bit as upsetting as they appear.

In her 11th novel, Canadian author Cordelia Strube lays bare much of the tragedy and ugliness of life in brutal images conveyed with brutal words in brutal detail. That she also succeeds in creating a story filled with poignancy and populated with characters who are deeply moving even as they are profoundly damaged, while at the same time putting together phrases and sentences that can prompt laughing aloud, is a feat that borders on the miraculous.

Stevie is a woman approaching early middle age. She’s a recovering (that word falls just short of demanding quotation marks) alcoholic and the kitchen manager of one of the underperforming branches of Chappy’s, a Canadian chain restaurant. Her staff is ethnically diverse and uniformly problematic, with many of them sharing far too many details of their degrading sex lives while at work. The scolding shadow of Corporate-with-a-capital-C looms during every shift.

Stevie has a son who is in the agonizing throes of PTSD after serving in Afghanistan. He is also the product of a gang rape, something Stevie has never told him. Add to that Stevie’s parents, who both suffer from dementia, and Stevie is clearly a textbook member of the sandwich generation, if the slices of bread in that sandwich are the rapidly tightening jaws of a vise.

Stevie goes to a creative writing class with women she describes as yoga moms. They write about their brilliant kids in their diaries for class. Stevie writes:

“I used to try to figure shit out, like why in a dream my apartment was full of seals. Or why I was gangbanged in a Ford Fiesta and tossed behind a dumpster with blood streaming down my legs.”

Stevie is the narrator of her story. The worldview she shares is, quite understandably, dire. Reflecting on her parents’ decline and on her mother having always told Stevie that she sees the bad in everything: “Now I know life gets worse until one day you can’t remember how to use a fork.”

In a fairly long novel that is often, not unpleasantly, dialogue heavy, Strube somehow manages to chart changes in Stevie and in those around her that make transformations from a truly grim beginning to the chance of redemption realistic and believable.

Stevie is nothing if not honest with herself and with the reader. She has no illusions that she was and is anything other than a terrible mother. When she comes home from the restaurant to find emergency vehicles outside her apartment building, the possibility that they could be there because her son has died doesn’t register a blip of regret:

“It is not a tragedy. It is for the best. No more vomit, no more fights, no more beers and DTs, no dishes to clean but my own.”

But it is not her son who has died, it is one of her neighbors. And he leaves behind an old, blind dog. Who somehow ends up in Stevie’s “care” (no way to avoid quotation marks around that one).

But this same woman who inspires great concern for that poor hound’s safety gives burritos to homeless people who come in the restaurant. And she is the same woman who can be a listening, supportive friend to one of the yoga moms who has cancer and whose husband is cheating on her.

And as if an orphaned dog isn’t enough to break a heart and turn a life around, an essentially orphaned child shows up when a woman drops off little Trudy, who is the daughter Stevie’s son Pierce didn’t know he had.

Yup, Stevie is a grandma. And it turns out she’s a rather good and patient one at that.

Moments of grace and kindness spring from what seems at first like completely barren earth. The old dog howls when Trudy sobs for her missing mother, and then the little girl comforts the old dog in his sorrow for her. The aunt of one of Stevie’s co-workers is a wise, warm, welcoming pip of a character. And another co-worker, himself a product of a gang rape, is a source of affection and comfort not just for Trudy but also for Stevie. Many of the moments of dark humor come from Stevie herself, who goes to the staff Halloween party at the restaurant dressed as Joseph Stalin.

Yes, as with all creative endeavors, there can be misfires. On a trip to the dog park, the reader is informed that one of the dogs is carrying a bloodied sanitary napkin in his mouth. The question of why the reader needs to know this remains unanswered, since this piece of information seems to do nothing to advance the narrative or to elucidate anyone’s character (other than that, perhaps, of the specific dog in question).

But as with all worthwhile creative endeavors, any issues become secondary at most to a tale worth telling that is well told. In Misconduct of the Heart, Cordelia Strube achieves a transcendence in the person of her protagonist that speaks to hope in the worst of times, and this is forever worthwhile. As Stevie writes to her son:

“The future, in my world, as always been obscure. I have come to appreciate its darkness. To see far ahead—to know exactly what is to happen—robs us of unexpected sparks.”