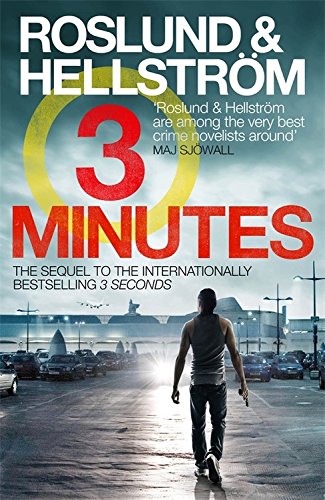 “a graphic portrayal of a dirty, ugly slice of life . . . Recommended for anyone seeking to know more about the drug cartels that threaten society.”

In 432 pages of narrative that goes beyond gritty, all the way to stomach turning in its portrayal of the day-to-day activities of the drug cartels in Colombia, Three Minutes by Anders Roslund and Borge Hellstrom delivers a picture of an ugly reality many will refuse to believe, not because it isn’t true, but because they don’t want to believe such evil really exists.

Missing, presumed dead by the Stockholm police, Piet Hoffmann is living in Cali, Colombia, with his wife and two sons under the name of Peter Haraldsson. That’s the name his handler back in Sweden knows him as; it is the name that El Mestizo, Colombian drug lord, calls his enforcer: Peter or El Sueco, the man who kills on command.

“Hierarchy. Money. And it just kept going. As it does when you internalize the system of daily life around you. You are born into it, nurtured by it, embraced by it, until eventually you embrace it as normal life.”

That is what Piet’s wife, Zofia, is afraid is happening to her husband: He is embracing the murdering, the torturing, the selling of deadly drugs. “It’s going to change you, Piet. It already has . . . Killing someone changes you, you’d have to change in order to stand it. In order to continue.”

But if Piet takes his family back to Sweden, he will be arrested, and Eric Wilson, his handler, will not be able to help him. “Going home. A life sentence if the Swedish authorities found him there. A death sentence from the Polish mafia if they found him.”

Zofia tells him that she can no longer stay in Colombia; she wants to go home to Sweden even if it means visiting Piet in prison every day.

Piet’s choice is made for him when the cartel kidnaps Timothy D. Crouse, the Speaker of the House of Representatives, who is the driving force behind a secret drug enforcement project. As a result of the kidnapping a list of names of targets is released by the DEA. Piet’s name is on it.

Originally Piet name was on the list as a way to give him legitimacy to his undercover role as the drug cartel enforcer. Now it makes Piet a target, a literal one. The DEA is sending drones and hit squads to take out the members of the cartel’s leadership.

The head of the DEA, Sue Masterson, meets with the president’s advisors, including the vice president and the chief of staff, in an attempt to persuade them to remove Piet’s name. For political reasons that are a betrayal not only of one of their own operatives, but a betrayal of what is right and ethical, the group refuses to remove Piet’s name from the kill list. Morality and politics are diametrically opposed.

Piet has no choice: He must rescue the Crouse and return him to the United States, and he must have help. He calls on Eric Wilson who assigns aging, overweight DCI Ewert Grens of the Stockholm police to fly to Colombia to sort out Piet and his impossible plan.

Ewert who three years before had given the order to shoot Piet Hoffmann as a dangerous escaped convict before learning was working undercover for the police, was left to believe he was responsible for killing an innocent man. But Ewert knows better and has for three years. “I’ve investigated two hundred and twenty-seven murders. Out of those, five are unsolved. And seven are solved but the perp remains free. But that man you saw there, Wilson—that’s the murderer I wake up every morning glad to know I never caught.”

Action and suspense become almost unbearable as Piet and Ewert with the help of Sue Masterson and the U.S. military proceed with the plan to rescue the Speaker.

Three Minutes requires a calculator to keep count of the dead bodies, most dispatched in a grisly manner, although to describe any murder as either painless or bloodless is an oxymoron.

More horrifying beyond murder is the means, the MO. The congregation of young children ten, eleven, or a little older, waiting for an adult, a leader of the drug cartel, to choose one of them, hand him a gun with two bullets, and give him the name and address of his target, is an image that is entirely incomprehensible to the average reader.

The mental compartmentalization required by the characters, those few with a conscience, to keep that part of their life that orders torture and murder separate from the “normal” part of their life that loves their family and helps others (if it suits them) is so shocking as to be almost unbelievable. One needs to remember that the characters are psychopaths as are their real counterparts.

Roslund and Hellstrom demonstrate considerable skill in creating such realistic and believable characters. They even make Piet likeable to a degree. Not until Piet’s actions at the very end is his true character in doubt. One is left to wonder how much of a psychopath is he. Has he as his wife feared lost his humanity?

Three Minutes by Roslund and Hellstrom is not for those who cannot tolerate acts of violence even when they are committed on the printed page. Nor is it for those who deny for whatever reason that violence and murder are synonymous with the drug trade.

Three Minutes is a graphic portrayal of a dirty, ugly slice of life that succeeds in shocking one out of complacency. If that is authors’ goal, then they have succeeded. Recommended for anyone seeking to know more about the drug cartels that threaten society.