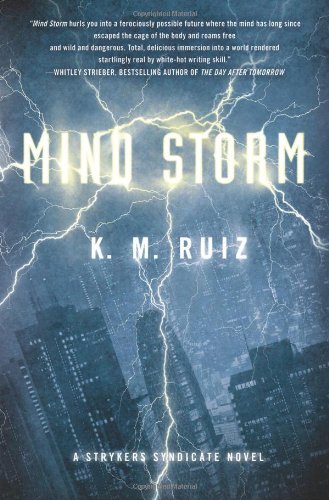 Those who survived are thrust into a toxic world of dead zones, radiation, acid storms, and a severe depletion of food sources. What remains of the Earth is less conducive to living than it is fighting to survive.

Many of the humans who managed to pull through the wreckage suffered DNA mutations, deformities and disease, rendering them “unregistered” and undesirable, dooming them to live out their days with no identity, in a society of miscreants, while those with clean DNA reap the benefits of whatever crumbs of privilege are still available.

In addition to the human casualties, The Border War bombs created another form of beings known as psions. Their mutations have rendered them inhuman and unregistered, but psions are endowed with powers such as telekinesis, as well as electro and pyrokinetics .

After the Border Wars, The World Court—the new incarnation of the government—harnessed the psions in the Strykers Syndicate, an organization geared to guard against illicit activity. With a life expectancy of 30 years, psions are considered “evolutionary dead-ends” and are little more than expendable slaves contracted out for high-risk jobs; for which death is often the price.

The various levels of power and skill among each psion determine its strength, abilities and resiliency as a soldier in the field. In Mind Storms’ world, all wars are fought using the mind as a weapon, which proves to be even more brutal and lethal than any available weapon artillery.

For Threnody, a Class III electrokinetic and her partner Quinton, life in Stryker servitude is all they’ve ever known. Serving and protecting humans and the World Court is their purpose until they eventually burn out from using their abilities. Having failed miserably on a previous mission, Threnody and Quinton are given one more chance. However, when they are paired up with Jason and Kerr, two psions that are considered damaged goods by the Syndicate and Strykers alike, Threnody and Quinton realize they’re not meant to make it back alive.

With orders to find and terminate the very dangerous and powerful Lucas Serca, Threnody and her team realize too late that they are no match for Lucas. As Lucas pulls the four psions off the government’s radar and into his control, the team of Strykers must go against every instinct they have and trust one of the most lethal men on the planet.

A fast paced, action packed sci-fi frenzy, Mind Storm reads like iRobot meets Mad Max with a hint of Terminator. Science fiction fans will be swept up and violently hurled into a dark and unforgiving future, where men and machine fight side-by-side to save what little remains of the world we used to know.

K. M. Ruiz’s Mind Storm not only solidifies the beginning of an exciting new series, but heralds the debut of a notable new voice in the sci-fi genre.