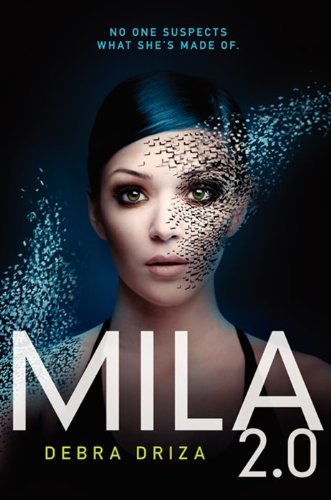 Mila 2.0, the debut novel of Debra Driza, is a sci-fi thriller in the style of The Bourne Identity.

Mila is a teenage girl who inadvertently learns she is not who she thought she was. She’s an android, an experiment in artificial intelligence. She made her way out of the lab when her “mother”—the scientist who helped create her—took her and ran off after learning Mila was exhibiting human emotions. Government operatives as well as rogue forces with their own wicked agendas are determined to capture them both.

Mila and her mother are on the run.

Mila 2.0 is timely in this age of growing technological advancement, managing to stand out with a fresh premise on crowded young adult shelves.

The novel starts slowly and somewhat mysteriously as Mila tries to grasp fleeting memories of her father and times past—all in the hopes of making sense of her life and her mother’s rather odd sensibilities and behaviors.

The relationship with Mila and her mother is one of the main threads tying the pieces of the story together. When Mila discovers her true identity, she reacts as any teenager would: betrayed, hostile, angry. Since the story takes place after the woman Mila knows only as Mom runs away with Mila from the lab, we never get the chance to experience that build up of human emotion that motivates her scientist-creator-mom to kidnap her in the hope of giving her a real life.

In fairness, adding in this bit would probably have greatly increased the page count. Instead, narrative space is spent exploring Mila’s flawed friendships with schoolmates and her burgeoning first romance.

The story escalates to an edge-of-your-seat adventure as Mila and her mother try to avoid being caught. An essential element that the readers are privy to is Mila’s struggle to reconcile what she is with who she wants to be—and how the two desires merge.

Ms. Driza writes a story full of drama, excitement, and sadness with a smooth and complete story arc that nonetheless leaves us eagerly awaiting the next installment.